In August I hosted the first BlogFlash event (#BlogFlash2012) and was thrilled to meet some wonderful writers and bloggers through the endeavour. Although another BlogFlash event is currently being planned for 2013, I jumped at the chance to run a one-off special for Halloween, cohosted by The Indie Exchange.

I hope you enjoy all the posts you read for this spooky event. You can even vote on the post you enjoyed most (except the hosts’ posts!) and one of the participants will be listed on The Indie Exchange sidebar for a month.

Transcript: Meet Georgia
We’d been in the condo for a few weeks when the weirdness started.

While I was working in our second floor bedroom, I’d hear a door open then footsteps downstairs. Dave’s office was a few blocks away. I assumed it was him, stopping to pick something up. Sometimes I’d go down to say ‘hi,’ find no one, figure he’d left, not wanting to interrupt me.

I heard footsteps on the stairs. A few times I saw the doorknob turn, figured I’d imagined it. 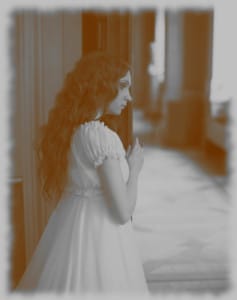 One day, Kimmie, our youngest, told her sister Lib she’d seen a ghost-and Lib described her. Until then no one had talked about any of this. They called her Georgia. They guessed her at age at 17. She wore Victorian clothing-a long dress with an empire waist-had long blonde hair.

Sometimes, Kimmie would wake at night and see Georgia sitting on her bed. The kids saw her in the basement. Kimmie would be in the bathroom, see a shadowy figure in the mirror, passing behind her.

We assumed Georgia was lonely, desperate for the company of young people.

When Georgia was in a room, you felt a palpable presence, like when someone walks up behind you. I’d see her at night, a glow on the rim of the tub. We’d be in the basement, watching TV and she’d join us.

We talked to a woman who studied ghosts. With no prompting, she described Georgia to a T. Georgia was stuck, she said. She advised us to talk to her, tell her she was scaring our kids, ask her to go away. That night, Dave walked from room to room, as instructed, asked her to please leave us alone. We tried burning incense, which was supposed help her to the next world.

For a short time, nothing more happened. When she returned a few weeks later, she was more brazen.

One night, while Kimmie was getting ready to go out, the radio in her room started blaring. She screamed, terrified. Dave raced into her room. The knob on her stereo was turning right and left. The music went soft, started blaring again.

Again, Dave asked Georgia to leave, and again she did-for a while.

One day I decided to work in the basement. We were renovating, expecting workers later in the day. In the basement, it would be quiet. It was chilly. I thought about running upstairs for a sweater, happened to glance at the TV. It was off, the Comcast box below it also turned off. On the LED display, the words COLD HERE appeared, the words moving right like a rotating news ticker. And then it said HELP ME.

I was like Road Runner, tripping upstairs, moving faster than my legs could carry me.

A few nights later, Kimmie woke up and Georgia was on top of her, holding a pillow over her face. This time, Dave insisted she leave. We felt guilty-she was young, obviously lonely. But she was scaring our family.

For two more years, Georgia came and went. We felt her, felt cold spots in the house, but she never showed herself physically again. Dave and I began traveling frequently, the house often empty. She returned less frequently, her stays shorter. Then one day Georgia was gone.

The condo was part of a new development and we thought maybe the excavation had disturbed her grave. There was a seminary at the top of the hill, above the development. Maybe she’d died there. Whatever had happened, it had taken place long before the Internet. I had no luck finding information.

I still think about her sometimes. I wonder where Georgia went next, if she ever found her way home.