Michel Sauret: You Can’t Keep Your Luggage: Publishing a Short Story Collection Versus a Novel

I’m thrilled to welcome Michel Sauret to the blog today. Michel has embraced the difficult but compelling art of the short story and is here to share his journey so far!

You can’t keep your luggage: Publishing a short story collection versus a novel

I was 17 years old when I finished the first draft of my first novel, ‘Breathing God.’ When I hit the end, I felt spent, like I didn’t have a single story left in me to write.

Later on, I went to the University of Pittsburgh to study art (I wanted to be a painter),but then  I asked myself, ‘How am I supposed to make any money?’ So I switched to English Writing.

But at least I had found a new drive. Instead of novels, I wrote short stories. They piled up in bunches. Most of them were terrible (I now realize), but somehow I managed to land an A in all my writing classes.

In 2005, while I was still in college, I published ‘Breathing God’ through a Print-on-Demand company. I discovered that selling books was a hell of a lot tougher job than writing them . In the end, I sold maybe 300 copies, and I told myself (silently, and in a secret that I didn’t want to admit to anyone), ‘I never wanted to do this again.’

The years passed, and the stack of terrible short stories grew. Only they weren’t as terrible as I thought … gradually the mounds of rejection slips turned to personal notes of congratulations.

My stories got accepted places. I felt vindicated. No. That’s not the word … validated!

Though at times we do feel a twinge of triumphant vendetta when our rejected work gets accepted by someone else, right? As though we somehow we got our revenge on those who rejected us.

But then, years of silence passed in my writing. I returned home from a year deployment to Iraq which – though incredibly safe and mundane – left me completely drained.

Finally, last August I decided I would go back through my stories to see if there might be enough there to put together a collection.

There were some good pieces, but the collection felt unfinished. A few of them were tied together by characters or coincidences, but for the most part they formed a loose array of scattered leaves.

That wasn’t good enough. I needed a theme. I needed something that would validate these stories to appear together in one book.

So I went back to writing with a sense of madness. Madness because somehow a dozen or so crappy stories grew to a total of 22. Most of them were rewritten entirely. I changed characters’ names, motives, settings, entire passages … endings! Then suddenly, in just a matter of a few months, I was finished. I had written five or six new stories from scratch and reworked most of the others.

They were all interconnected.

I called the book, ‘Amidst Traffic,’ named after the title of one of the stories, and to serve as a metaphor for life: how we sometimes travel the same roads as others or even crash into each other unexpectedly.

Through the process, there were so many characters and locations to keep straight that I had to create a spreadsheet to keep them all organized in my head.

My goal was not to create a single narrative that unfolded throughout the collection. I wanted each story to stand alone. Each story had its own beginning, middle and end. They would not be like chapters in a novel.

For that, I believe that debut authors who release short story collections don’t get enough credit. I still believe that short stories are one of the few things right with literature today.

In a story collection, you have to establish a sense of cohesiveness without repeating yourself. Each character needs to want something new and different from the last. Each story starts a new plot, a new conflict. Each is a new world, or a decisive moment worth exploring.

When I wrote ‘Breathing God,’ I had one protagonist and about four other secondary characters who were vital to the novel, plus another half-dozen or so tertiary characters.

In ‘Amidst Traffic,’ each story has three or four characters who are essential. A new protagonist appears with every story. Some protagonists return from previous stories, but each time their desires and conflicts start from scratch again. It can be exhausting having to create so many characters who are important in their own right.

When writing a novel, it’s easier to build up that momentum to propel you forward. Plus, the secondary characters are there to push you along.

Think of it as taking a road trip in a single vehicle. Yes, you have to switch lanes, take exits, pause for a pee break, stop for coffee and refill the gas tank, but in the end the trip feels constant. You traveled in the same car the whole time.

Compiling a series of short stories into a book is like taking that same road trip, but every few hundred miles you ditch your car for a different one, sometimes going from manual to automatic, from minivan to sedan, hop on a motorcycle maybe, then break down, get off and run to the next vehicle and go again.

You can’t even take your luggage with you.

Then, somehow, you have to justify that all these random stories actually belong together. They have to be cohesive somehow.

The hardest part was choosing the stories’ order. I agonized over this several times. Because I didn’t want to form a single narrative, I intentionally spaced stories apart so the connections wouldn’t be immediate, in hope the reader would stick with the stories long enough to see those connections unfold later in the book.

I drew up an entire diagram with lines and bubbles that showed how the stories connected, so that I could accomplish the perfect order … the perfect balance!

With most novels, figuring out the chapters’ order usually takes care of itself (unless there’s a ton of jumps in time, locations or even narrators).

And then, once you have it all laid out and paginated … you question yourself.

I know that novelists question the same thing. But with a short story collection those doubts are even more daunting: ‘Do I have enough stories? Are there too many? Should I have replaced this one with another? Did the reader get enough from this character? Can I squeeze in one more?’

Even now, as I reflect on those stories that leave off open-ended, I question whether the book is complete, especially with so many characters who don’t return again as you might expect.

But I think that tension is good. I feel more driven now to go back to writing after publishing ‘Amidst Traffic’ than I ever did after ‘Breathing God.’ There are lives hanging in the balance with unfinished endings that I can always return to.

In fact, some of my characters will return. And this time, I might give a few of them a novel of their own. Heck, I might even let them bring their luggage.

Michel Sauret earned the title of Army Journalist of the Year in 2008 for his work in Iraq while deployed with the Army public affairs. His short stories have been published internationally, including the British journal “Brand” and the anthology “Best New Writing,” which is released annually by the Eric Hoffer Award. His short story collection, “Amidst Traffic” made the Editor’s Choice selection by Independent Publisher and received the “Indie Reader Approved” stamp by IndieReader.com

Michel runs a blog to discuss his writing and share his experiences as an independent author. 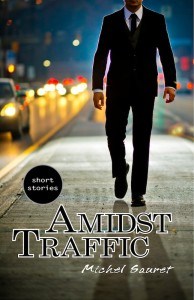 “Amidst Traffic” is a collection of high-caliber, interconnected short stories with a literary flair:

A short-order cook digs a hole in his back yard to escape nightmares of mutilated children; A woman covers her body in tattoos to hold on to emotions that continue to slip away; A soldier who returns home from Iraq struggles with the idea of gratitude, which, if resolved, may save his marriage; A man begins a game of watching strangers to see what it feels like to play God.

All of these stories, and others, are linked somehow. With each tale, more lines and connections begin to form. What initially feels like chaos, gradually begins to take order. A purpose exists that is unveiled by the end.

Every story is crafted with a sense of compassion for the human spirit, while seeking answers about the conflicts we live through in everyday life. The characters in these stories will make you care about their struggles and hope for their redemption.