For the Love of Love: David M. Brown, author of Man vs Cat

This is the final post in For the Love of Love 2013 and I’m delighted to welcome David M. Brown, my good friend and the author of Man vs Cat.

David's postDavid M. BrownMan vs Cat excerptMan vs Cat
Romantic films are not hard to find – Gone with the Wind (1939), Casablanca (1942), An Affair to Remember (1957), When Harry Met Sally (1989) and any version of Pride & Prejudice or Wuthering Heights to name but a few. However, I’d happily trade all of them in for one movie. There’s only one that can really get to the heart of true love and that is The Princess Bride (1987). If you haven’t seen the film stop reading now! No really! Spoiler alerts coming up!

Rob Reiner’s classic has it all: boy, Westley (Cary Elwes), girl, Buttercup (Robin Wright), the villains Prince Humperdinck (Chris Sarandon) and Count Tyrone Rugen (Christopher Guest), friends Inigo Montoya (Mandy Patinkin) and Fezzik (Andre the Giant), great set-pieces such as the Cliffs of Insanity and the Fire Swamp, and don’t forget the ROUS’s (Rodents of Unusual Size). From start to finish The Princess Bride has it all.

Westley and Buttercup’s is a seemingly tender but not unique romance. He leaves to earn money so they can marry, insistent that what they have is true love and that not everyone enjoys such a thing. Buttercup later hears Westley has been murdered and is inconsolable. After being kidnapped by an oddball trio, Buttercup is pursued by the mysterious Man in Black who turns out to be our now resourceful Westley. Witty, cunning and pretty nifty with a sword, Westley overcomes tests of swordmanship, strength, wits, spontaneous fires, quicksand, rodents and even death itself. Even in a state of paralysis he is able to come back from the void to be with Buttercup. I imagine if most husbands showed the same level of devotion to their wives as Westley does to Buttercup then the majority of marriages would never end.

David Brown could be considered a fantasy fanatic, especially since he has spent the last 10 years developing a 47,000-year history for his fictional world of Elenchera. When converting his obsession into literary form, David commits himself to a rigorous writing and editing process before his work can meet his approval. Combined with the critical eye of his wife and a BA Honors in History and English, David’s dedication leads him to his goal of inspiring readers through heartfelt stories and characters.

Although David is inspired primarily by fantasy fiction, he also finds his muse in the form of anime, world cinema, history, and biographies. His own books, Fezariu’s Epiphany, A World Apart, and the in-process Ansel’s Remorse and The Stars Beneath the Parapets combine aspects from worlds both old and new into compelling tales of a world not soon forgotten. David himself certainly does not lack a spirit of adventure; in fact, he left his job in 2007 in order to spend a month traveling. Second only to meeting and marrying his wife, David counts this as one of the most amazing experiences of his life.

Kain to me; Mr Kain to everyone else.

Gentlecat, philosopher and adventurer. Elegant, strong, sophisticated, debonair and fond of the sheep pillow that my owners keep on their bed.

Definitely Frizzy Hair. She’s kind, caring, generous and far more articulate than Beard Face. That bespectacled idiot is under the illusion that he is in charge of the cats in this house. Sometimes we pretend he is, but generally we just laugh in his face. The guy is a complete moron.

Probably Casablanca. Everyone knows a quote or two from that film. It’s one of the rare instances where humans actually do something decent on the big screen though I believe Humphrey is a silly name for a leading man, don’t you think?

The Complete Works of Shakespeare. Old Will knew how to write a play, didn’t he? Hamster and King Liar were wonderful.

I like to relax by the fireplace (we don’t actually have one, but it’s a nice image, so just go with it for now) with a glass of specially formulated milk and listen to anything classical – Beethoven, Mozart, Wagner or Katy Perry.

Charles Darwin. Okay, I’ll admit that his whole theory of evolution is clearly nonsense. Cats were the first species and we created everything else. I can’t fault Darwin though for a great work of fiction and his beard was far more convincing than Beard Face’s facial whiskers. 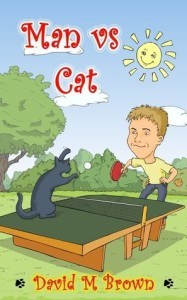 History has known many famous cats – Garfield, Mr Bigglesworth, Simon’s Cat, the Aristocats, the Cheshire cat and the Keyboard Cat on YouTube.

In recent years these feline things have replaced man’s best friend as the most popular pet in the U.S. while the Ancient Egyptians once worshipped them as gods. This was a mistake and I’m here to tell you why.

Man vs Cat is the story of one man, one woman and the six cats that changed their lives forever. To the woman they brought love and affection, to the man they brought sleepless nights, fear, paranoia and even ruined his jigsaw. Need I say more?

Thank you to everyone who took part in or followed For the Love of Love!