Earlier in the week I shared the post ‘Boston Strong: A City of Resilience‘ with pictures I had taken in the city so many of us have had in our hearts these recent weeks.  After posting, my wonderful friend Ginnie Smith made me aware of a tribute piece she had posted on her own blog, The Year of Living Englishly, and has kindly allowed me to share an excerpt from her beautiful post. Please do stop by and read the full and moving piece.

On Sunday afternoon I went down to the memorial to those killed in the Boston Marathon bombing. 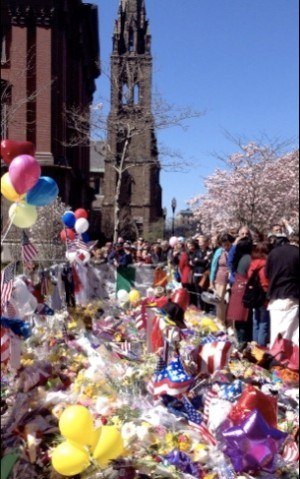 I’ve been feeling completely shattered ever since it happened last Monday afternoon, over a week ago.  It’s exactly the same feeling that I had in 1993 when I looked out of my office window down Fifth Avenue in Midtown Manhattan and saw the smoke rising behind the Pan Am building from the first attack on the World Trade Center, and then eight years later when New York was attacked a second time on 9/11/2001 which I wrote about in “New York, a Love Story.”

Sunday was a lovely spring day here in Boston, sunny, in the 50s, with daffodils, cherry trees, and magnolias in full bloom.  I went down on the T to Arlington Street, one stop past Copley, which was still closed due to the bombing, and walked the several blocks towards the finish line. 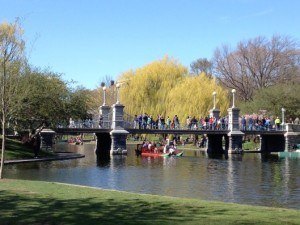 Six blocks of Boylston Street were shut off with metal barricades.  At both ends were memorials to the three–now four, with the murder of the MIT policeman–people dead and 260 people injured, some horrifically.

There was a real mix of people at the memorial, probably about half native Bostonians, half foreign tourists, judging by the accents.  All was quiet except for a man who stood at the front of the barricade laughing loudly as he talked on his cell phone. After a few minutes of hoping he would realize how hurtful his behavior was, I finally said to him, “Please don’t laugh.  People have died here.” He muttered “sorry” and slunk away, cell phone in hand.

The memorial was filled with bouquets of flowers of all sorts, three large white crosses for the three victims of the bombing, running shoes, Boston Marathon medals and t-shirts, posters, signs, and American flags.  A man who appeared to be a Vietnam vet was managing the memorial, taking flowers from bystanders and putting them in place.

[Read more on The Year of Living Englishly…]