This week sees the continuation of the ‘History: Remembering a Neighborhood’ series by my immensely talented father, Jerry R. Giuliano. Please enjoy this wonderful piece, and – if you missed it – catch the opening to the series.

The storm brewing in the heart of my old memories was about to collide with a hot air stream of new conflicts in my belly. I decided to leave the storm at the St. Marie Club, certain I could find calm farther up Maple Avenue. Walking to 5th Street, I decided to leave any thoughts of the future, to those who would make it, and started thinking, again, about the old neighborhood.

Richie’s, Jerry’s, Tony’s and Mickey’s barber shops were spread across the greater neighborhood”, but my neighborhood barber adventures started at home, and ended at Mickey’s. 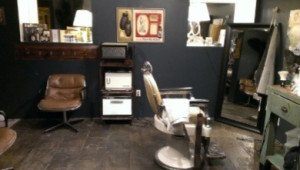 At the barber shop

The barber shops were open daily except for Sundays and Wednesdays, but the biggest haircut day was Saturday. Besides the Social Clubs, the barber shops were the best place to get the news, talk politics, argue sports, and to socialize. That’s what the men did. If you were a kid, you sat still, stayed quiet, paid attention, and waited. Sometimes, at the barber shop, you were asked to block your ears, and to never repeat what you wouldn’t have heard if you blocked your ears like you were supposed to in the first place. To quote Yogi Berra, the old New York Yankees Sage, “You can see a lot just by observing”. I wonder what he thinks about waiting.

I don’t remember my first one, but I do remember a few haircut episodes that prickled my emotions. I recall some happy haircuts, some frustrating ones, and one that was a little scary.

I got the happy ones from my “cousin”, from Philly; he used to come on Sundays once a month, to see friends, to visit us, and to cut my hair. This “cousin” was a real barber; he carried his own comb, scissors, cape, safety pin, drop cloth, hand operated hair cutter, talc and brush in a travel case.

I sit on a kitchen chair placed on a drop cloth beneath a light in the cellar. A moment later I hear my cousin the barber coming. He has metal taps on the soles and heels of his shoes. He’s tap, tap, tapping his way to the back of my chair where he stops, sets his black satchel down, opens it up, pulls out the white cape, and with a magician’s flair twirls the cape around my body, joins the ends together at my neck, and pins them. OUCH!!! I hoped maybe once, just once, he could pin the cape without jabbing the pin through the back of my neck. No such luck.

He puts his hand on my head and rubs it around a few times. Then, without my asking, he says, “OK, a boys regular.” I was getting a “boys regular”, whatever that was. The first thing I hear at the back of my head is snip, snip, snip, snip, and snip. I guess he was just practicing, or maybe getting into his special barber zone, because not one hair follicle fell from my head. The next few snips actually took away some hairs, then empty, barber zone, snips again. Finally, the hand clipper appeared. 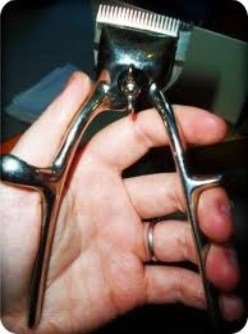 The hand operated hair clipper is the precursor to today’s electric hair cutter, and using it required skill and a hand that never got tired. It probably took 500 squeezes for one “boys regular” so it’s not a wonder why the old time barber’s discouraged buzz cuts. Think about it. Anyway, I can still smell the baby powder, and feel the whap, whap, whap, of soft bristles brushing against the back of my neck. When he was all done, he smiled big, and handed me a nickel. That was a happy haircut.

After a few practice snips, and ten minutes into the job, I hear a voice starting in the kitchen, and scratching its way across a blackboard to my ears; “Edddddieeeee, vieni a mangiare”. Great! Must she call him in to EAT EVERY TIME I get a haircut? He eats. I wait. He returns satiated. I haven’t eaten since lunch. He’s happy. I’m not. He wants to talk. I don’t. When we part, he smiles. I fume. I’m frustrated. I could have been playing, instead of having to wait for him to eat. I don’t like the stupid haircut anyway. It took about 70 years, but I’m over it.

One Saturday afternoon, I was at Tony’s with my cousin Albert; we were the last two in before the “closed” sign went up, and the shade was pulled. It was crowded, as usual, but after an hour and a half wait, it was the guy sleeping next to Albert’s turn. When the barber asked, “Who’s next”, Albert gave the sleeping guy a good poke with his elbow. No kidding, the guy died while he was waiting for a haircut. Don’t ask how long he was waiting; it must have been a really long time before we got there. A side note: Once Albert farted 28 times in a row.

There was a big sign in the front window at Mickey’s Barber Shop that said, “4 Barbers-No Waiting”. Considering what happened to the guy waiting for a haircut at Tony’s, I thought it might be a good idea to switch barbers. I did. I would tell Yogi, “No one ever waits in a barber shop, it’s always too crowded”.