This week sees the continuation of the ‘History: Remembering a Neighborhood’ series by my immensely talented father, Jerry R. Giuliano. Please enjoy this wonderful piece, and – if you missed it – catch the rest of the series. 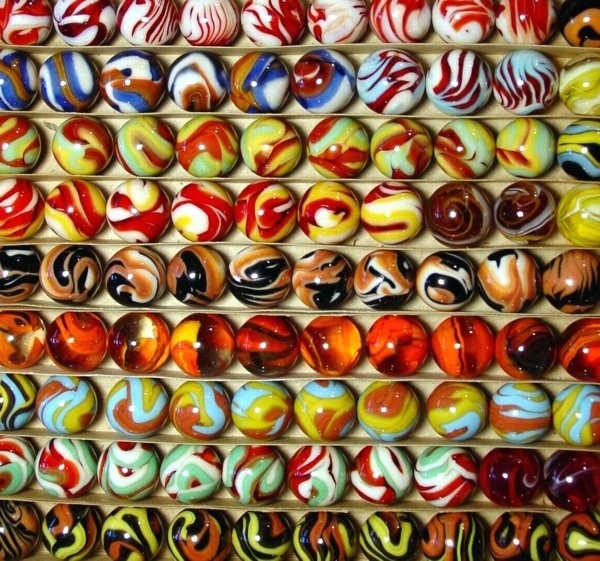 Marbles: Toys and art rolled into one (Credit: BuyMarbles)

The coal yard was our amusement park. Besides jumping into the bins, we did our marble trading there. Marbles were different sizes and reflected every combination of rainbow colors imaginable. The very best marble sizes, and colors, were always in some other kid’s pocket. 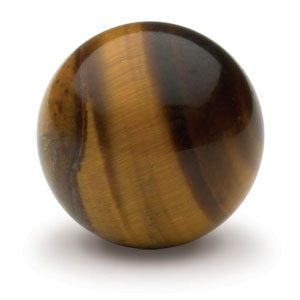 “I’ll trade ya two blues for a tiger eye. How about swapping your three peewees for my Clobby?  Are you nuts?  That’s my shooter.” When the trading was done, it was time to actually play the game of marbles. One good thing about playing marbles was that you only needed one other guy to play. But, additional players presented greater challenges and, possibly, more marbles to win. To play, each player placed an agreed number of marbles inside a ring, or triangle, called a “pot”, drawn in the dirt. If the ante were three marbles each, the players might agree that, one large “Clobby” could be used in exchange for two regular, or three peewees.

Can you speak the language of Mibster?
To the layman, a marble is just a marble. But if you’re an experienced player, you probably have a half-dozen slang terms to describe the sphere in front of you. Marbles usually earn their nickname based upon what they look like, what they’re used for, or the material used to make them. For example, “aggies” are marbles that are made from agate, a type of stone. An “alley” can be a marble made of alabaster, but it can also be another term for a “shooter” or “taw,” the large marble used to knock around the smaller ones, which are sometimes called “mibs” or “ducks.” “Bumblebees” are yellow and black striped. “Jaspers” are common, blue marbles made from glazed or unglazed china. “Onionskins” are glass marbles with swirls of layered colors that extend over the length of the marble. “Sulphides” are semi-opaque glass marbles that usually contain a small figured in the middle. Sometimes the figurine is an animal, a character (like Santa Claus), or even a real person (like Teddy Roosevelt, at left). And if you can spot any of these marbles on sight, you’re probably a “mibster,” a term for someone who plays marbles.

Read the full text at Mental Floss: A Brief History of Marbles (Including All That Marble Slang)

The object of the game was for each player to take a turn shooting the marbles out from inside the pot. When there were no more marbles left in the pot, the game was over. The match was over when the opponent had no more marbles left to put into the pot. There were “knuckles down”, “no standing”, and “no cribbing”, rules stated before each game; every time. I don’t know who the first person was to play the game, but every kid I knew learned the game, and got the marbles, from his older brother. Babe was an only child. Don’t ask where he got his marbles. I don’t know. 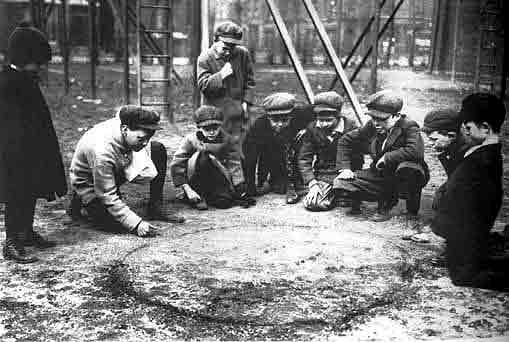 For such a simple game, the nuances, techniques, rules, regulations and arguments surrounding it were monumental. I doubt that’s the reason kids don’t play, or carry a pocketful of marbles, anymore. Maybe the time for marbles is simply gone. As visions of bright colored marbles, and coal blackened boys disappeared, I saw that the coal yard was gone, too.

I leaned heavy, on a long sigh, then turned my back on the black yard, and faced the snow white building directly across the street. When I gazed through the building, I saw a short, heavy set, older man inside. He was dressed head to toe in white, and covered with white flour. It was Mike, the neighborhood’s best commercial Italian Baker operating the town’s only Italian bakery.

The Montgomeryville-Lansdale Patch has some amazing “Then and Now” pictures of Lansdale at the links below: