Click here for Day 6 of the Literary World Trip

The Black Swans (The Antrim Cycle, Book 1) by N.W. Moors 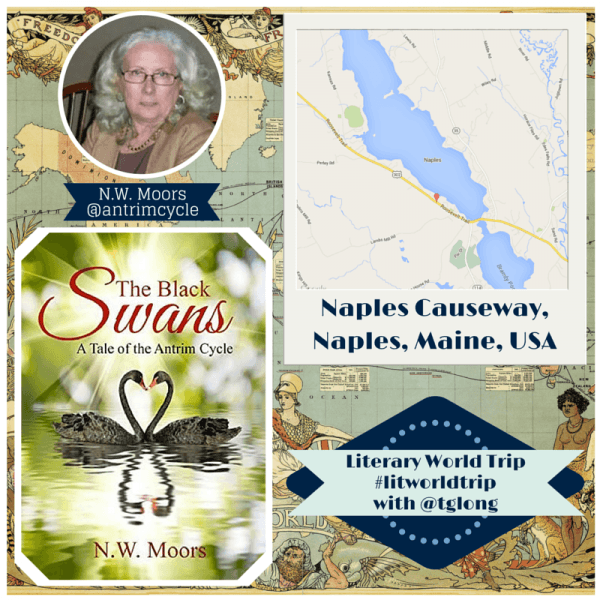 What happens there? The Naples Causeway is between Long Lake and Brandy Pond in the western part of Maine. There is a steam paddle-wheeler boat and all sorts of other water ventures as well as restaurants, gift shops, and other recreational activities.

Owen was driving, Nola in the passenger seat and Hugh, Finn and a girl he had met earlier tonight at Malones named Connie were in the back seat. They were headed over to Jimmie’s on the causeway for a night out. Nola insisted that they all go together for once, though she didn’t seem too pleased about Connie.

Owen slowly drove the length of the causeway, careful to watch for the pedestrians crossing back and forth. He found a place to park up at the far end, not too far from Jimmie’s.

“We’re here,” he called back to the others. Conn gently caressed Taisie’s cheek and she opened her eyes.

“You were looking at me again,” she murmured, but she smiled.

“Guilty,” he agreed. “We’re here. Wake up, sleepyhead.” Meanwhile, Nola had already gotten out of the van and was opening the back door.

“Come on, you two. You’re holding everyone else up,” she said. She was interrupted by a burst of fireworks set off over the lake. It looked like someone was setting off bottle rockets from a cottage on the other shore. It was a perfect summer night, stars clear in the night sky, and the colors from the fireworks reflected on the water.

Eventually, they were all out of the van and headed towards Jimmies. Hugh sauntered along, looking at everyone they passed, especially smirking at any young attractive women. Finn had his arm around Connie and his head was bent to her as they talked. Nola was like a little girl, pulling Owen along by his hand, leading the way. Conn, holding Taisie’s hand, strolled after them all, happy just to be in the moment, out for a night on the town with his girl.

By the time they got to Jimmie’s, Nola and Owen were already pushing two small tables together for the group. This early in the week, the bar didn’t seem quite as crowded as on the weekends. Hugh and Finn went up to the bar, to get a couple of pitchers of beer and some glasses. There was a rock band already playing and couples were up on the dance floor.

Taisie MacDonnell is a quiet girl who loves knitting and Celtic music. When a traditional Irish group moves to her small town of Antrim, Maine, she’s thrilled. And that the handsome pipe player she met at a fair is one of the band members makes it all the more exciting.

Conn McLaren and his siblings that make up the band, The Black Swans, are wanderers, moving from place to place. They have a secret that they must hide, a curse they have been under for many years, placed on them by the Fae at the behest of their step-mother, Aoife.

Taisie has no idea that becoming involved with Conn, the handsome pipe player, will enmesh her in magic, a centuries-old enchantment and pursuit by the Fae.

This book is a modern retelling of the old Irish story “The Children of Lir”.

I am the author of The Black Swans. It is a romantic fantasy about the fictional town of Antrim, Maine, set in the Oxford Hills of western Maine. The blog reflects the book showcasing Irish music, places to visit in the Oxford Hills, knitting, and writing as well as pages for book reviews and showcasing other Indie authors. 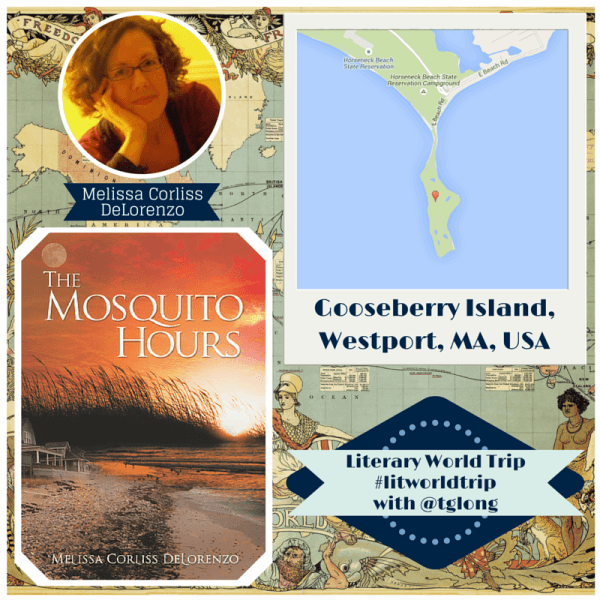 What happens there? It is the place where each of the three main characters find solace when it they require it. They each think of it a their own “secret place.”

Tania runs down the stairs and out of the house, and she is gone, gone, gone. She runs across the causeway, her feet hit the sand, the coarse grit grinds against the smooth skin of her soles. She runs along the sand path lined with beach plum bushes, until she breaks free to the shore, until her bare feet are in the water lapping to her ankles and collecting around shins, knees, thighs. She keeps running until the depth of the water makes it impossible to run any farther. She dives under a breaking wave and swims out deeper, tearing through water. Once she is out past the breakers, she flips onto her back. Her breathing is fast, her heart beats rapidly. She works to slow all of it, knowing part of it is simply waiting. She points her face to the sky. All that blue and the long flat line of the horizon reduce her size down to a manageable speck. The ocean opens up wide, the wind flows around her body and the sun spills its warmth upon her. She feels it on her head and through her hair, on her shoulders, running down through her hands. Feels it in the whorls of her fingertips. 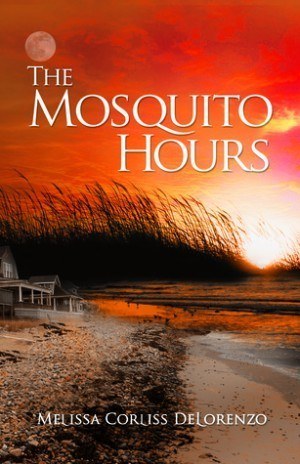 Three generations of women gather in an old rusted screen house each dusk—the mosquito hour—to excavate the secrets of life and bridge the social norms of the years between them. The Mosquito Hours explores tender human connections, the ways by which we navigate personal crises, the interaction of mothers and daughters, friends and lovers, all driven by the interweaving of this family of women. The Mosquito Hours is about that which sustains and the ways to begin to admit the truth behind your own life story.

Have you enjoyed any of these books or any other titles set in Maine, USA or Massachusetts, USA? Let us know in comments!