A Week with Giacomo Giammatteo | Guest Post: Best Investment I Ever Made

I am thrilled to say that Giacomo Giammatteo, author of Whiskers and Bear, will be a special guest on the blog all this week. On Monday, I shared his very open and touching interview. Today, Giacomo has a heartwarming guest post, and – last but not least – on Friday we’ll be able to enjoy a beautiful excerpt from Whiskers and Bear!

As well as these feature posts, there is also a $25 Amazon gift card giveaway. You can enter this below and share the feature daily for extra entries! Please continue to stop by throughout the week to find out more about Whiskers and Bear and Giacomo Giammatteo!

Giacomo Giammatteo: Best Investment I Ever Made

I have not done very well with investments. I always seem to be late to the party, or leaving when I should stay. As an example, I sold my Apple stock back in 1994. I try to forget the per-share price, but my wife keeps reminding me. And every time I say, “Damn Apple, they should never have gotten rid of Jobs,” she says, “And you should never have gotten rid of the stock.”

After a few other less-than-satisfactory ventures, we agreed we would let other people do our investing. Then, about five years ago, while on my way to the bookstore, something happened that changed that. While driving down the street, I saw a neighbor’s dog lying on the side of the road, her guts literally oozing out of her. With help from another man, we got her in the van and took her to the animal hospital. The neighbors didn’t have the money to fix her, so my wife and I paid for the bill. It was about $1100.

I skipped the book store after that and went home. My wife took the van to go visit a friend but called me thirty minutes later. On the way to her friend’s house, she had found a cat on the side of the road, not four blocks from where the dog was. It had an arrow through it. Needless to say, we made another visit to the animal hospital.

The vet asked us what happened. We told her the cat was not ours and that we found it like that. “Put it down,” she said. My wife looked at me, and we both agreed. “We can’t do that.” 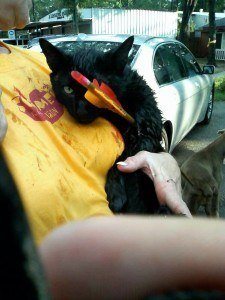 Hotshot, moments after Mikki found him

“It is going to be expensive,” the vet said.” And even then we don’t know if it will live.”

I looked at my wife, her shirt covered in blood, and the cat feeling safe in her arms. She nodded, and then I told the vet to proceed.

About half an hour later, the vet came out and told us the arrow had hit bone. Infection had set in. “The leg has to come off,” she said.

I knew what that meant, the cost of that cat just went from “expensive” to “ridiculous.”

A lot of selfish thoughts went through my head: The van needed work, we needed a new TV to replace the old 27″ behemoth, and it wouldn’t hurt to get a comfortable sofa to relax on while watching that new TV.

Everything Has a Price

Four days later we took home a three-legged cat. At that time, our sanctuary had fourteen dogs, so we gave the cat to our grandkids. They were eager to have him. They named him “Hotshot.” 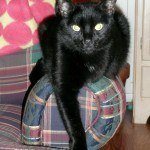 It’s been five years since we fixed up Hotshot, and I don’t know that I’ve ever seen a happier cat. He enjoys every day—every minute—of his life, and I swear he’s a grateful cat. When he looks at me, it’s like he’s saying “thank you.”

We’re still running that same old van, and it still needs some work. I did finally get a new TV, but the dogs took over the sofa, so there was no sense in getting a new one. 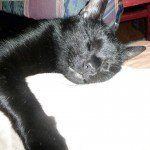 Hotshot ended up costing us $4200, but that investment was the best one I ever made. Better than putting it in Apple. For the past five years, that cat has provided endless joy and love for our grandkids and for all of us. When my grandson calls him, the cat jumps into his arms and wraps his one leg around his neck and nibbles his ears. The look in both their eyes…is truly priceless.

Giacomo Giammatteo is the author of gritty crime dramas about murder, mystery, and family. And he also writes nonfiction books including the No Mistakes Careers series as well as books about grammar and publishing.

When Giacomo isn’t writing, he’s helping his wife take care of the animals on their sanctuary. At last count they had forty animals—seven dogs, one horse, six cats, and twenty-six pigs.

Oh, and one crazy—and very large—wild boar, who takes walks with Giacomo every day and happens to also be his best buddy.

Whiskers and Bear were two of the best dogs in the world. They didn’t always listen or even try to listen, but they were loyal to a fault, and they were the best of friends. They hunted all of their food, and they protected our animal sanctuary with no regard for their own safety.

Stop by on Friday for an excerpt from Giacomo Giammatteo’s book, Whiskers and Bear.