Whodunnit? The Trust by Sean Keefer

Rather than a review – if you’d like a review, head to Sean’s Amazon page, where he’s already amassed an impressive 26 – I’ve decided to tell you a little bit about the book. And let you fill in the rest! 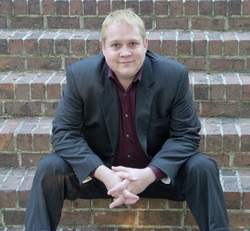 Sean Keefer is a struggling writer and musician who supports himself by the practice of law. He lives and writes on the coast of South Carolina. The Trust, his debut novel, has received multiple national awards. He is currently at work on a follow up.

To attorney Noah Parks, probating a will should be a simple task. But the Last Will and Testament of Leonardo Xavier Cross is anything but simple. Though he has never heard of Cross, the dead man’s will directs Parks to provide the legal representation for the estate; as part of his fee he’s to receive the contents of a safety deposit box – a safety deposit box no one knew existed!

Intrigued, Parks undertakes the task. After the body count begins to rise, the basic task of probating the will becomes complicated. Despite his appreciable skills, Parks has trouble unraveling the mystery; the answers he seeks remain elusive, forcing him to delve deeper into the shocking and deceptive Cross family history, setting the stage for an explosive finale that Parks can only hope to survive.

My Take on The Trust

Now it’s your turn: this is a mystery. Tell us YOUR version of The Trust. Use your imagination! And feel free to share the outcome as a comment to this post. Just don’t give anything away if you already know what happens.

Who do you think did it and why?

To find out the real answers, you’ll have to read the book!

Victims (choose as many as you want)

Central Mystery (other than who’s killing people and why?)

Book Trailer for The Trust:

Remember: this is YOUR version of The Trust. Have fun! If you’ve already read the book – awesome! Please don’t spoil the surprise for friends who haven’t read yet.