Interview With Sean Keefer, author of The Trust

I’m excited to introduce you to Sean Keefer, author of the riveting legal thriller The Trust. The Trust is one of the few books I’ve read recently that I truly could not put down. A real Renaissance man, Sean, a lawyer by profession, is also an author, singer, songwriter, and cook. You’ll find a “taste” of his writing here. For an interesting and insightful review of this “dramatic, eye-opening read,” click over to Stephanie Gamvernova’s fabulous site iMiraculous!

If you could have coffee with any 3 authors, living or dead, who would they be?

John Kennedy Toole – Author of A Confederacy of Dunces. Perhaps my most favorite book. He unfortunately died too young but Confederacy is an amazing book.

Ayn Rand – Atlas Shrugged has always been one of my favorite classics.

John Hart – He too is an attorney who has successfully made the move from practicing to being a full time writer. His latest, Iron House, proves he won’t be practicing law again anytime soon.

If you could only take one book, food item and drink with you to a deserted island what would they be?

The book would be A Confederacy of Dunces. The food would be pizza; I can’t seem to get away from pizza. Drink? That’s an easy one – Sea Smoke Pinot Noir.

What about you would surprise your readers?

I’ve been a musician for more than 25 years, a singer/songwriter/guitar player. I perform regularly. The Trust was my first novel but everyone who knows me is surprised that it was a book I released first and not a CD of my songs. Though that may be happening soon.

What was your favorite book as a teenager, and why?

As a teenager, I read Stephen King like it was nobody’s business. I loved him and devoured anything he released, but The Gunslinger was easily my favorite.

What is your perfect day as an author?

In fact, I had a string of about 7 perfect writer days. I was recently on vacation in the Caribbean. I stayed in a lovely villa overlooking the ocean. I would get up each morning around 7:00 am and write for several hours while the other folks slept the morning away. After everyone was up I would wrap up the writing and we would head to the beach where I would relax and think about the progress for the day. Then the next morning I would repeat it again. I was amazingly productive! Oh to be able to do that everyday. I would probably write a book a month.

If you could be any fictional character who would it be?

I’ve answered a lot of questions from folks since The Trust was released and this is the first one that has truly had to stop and think about. It would be easy to pick an action hero from one of the thrillers I read. It would also be easy to say a character from one of my books. There is also the temptation to pick a fictional character with some superpower. However after thinking about it for a time, I think I would chose Atticus Finch from To Kill a Mockingbird by Harper Lee. He embodies, for me anyway, all it means to be a lawyer. 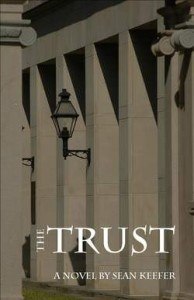 Where did the inspiration for your book come from?

I had the initial idea – a client coming into an office with a will that has the name of the attorney in it -and couldn’t get it out of my head. It literally followed me around for several weeks. So, I decided to start writing. The idea became the first scene and I went from there. Next thing I knew I had a book.

Writers are often surprised by something that happens in their book. Perhaps a character says or does something you did not think they would, or something you thought would only be a couple of paragraphs turns into 10 pages. What surprised you about your book?

I was literally surprised almost every time I sat down to write. Characters would appear, sub plots would develop and the storyline became clearer the more I wrote.

Who is your favorite character? Why?

My favorite character is Austin, the Australian Shepherd. When I started the book, I had one dog and he was the inspiration for Austin. After I finished the book, but several years before it was published, he passed away. People knew he meant a lot to me and they asked when I was going to do some kind of tribute to him. I didn’t realize I already had.

You’ve written a legal thriller in a literary style. Why did you make that decision? How would you differentiate this from genre fiction? Please explain.

What would you like readers to take away from the book?

While I spent a lot of time working the plot, I would really like people to identify with a specific character and get excited about seeing what happens to them in my next book!

You work as a lawyer. How do you find time to write? What is your writing process like?

Finding the time to write is the biggest challenge I have. I need several hours at a time to be productive. This means early mornings and late nights. Interestingly enough, my favorite place to write is in the lobby of a busy hotel. I like to set up and lose myself in the white noise. For reasons I don’t understand I find it really easy to concentrate and if I need character inspiration, I just people watch.

However, I start with a list of all the characters in the book for reference, my plot overview and the last chapter or two I have written. I re-read my last chapter, editing as I go and then when I reach the end, I start writing new material.

The Trust is an engaging, fast- paced book. Did you plot before you began writing? If not, how did you keep the story moving forward without getting on track?

I wouldn’t recommend it, but I just started writing. I had a general idea where I wanted to go but no idea how I was going to get there. I was able to stay focused by regular writing – that kept me on track. For my second book, I’ve done a treatment of about 4 pages tracking the story. Having this keeps me on task, but also allows for modifications as I make discoveries or have revelations while writing.

What advice would you give to aspiring authors?

Finally, you’ve had great success with this book. Congratulations! You deserve it! What (other than your blog tour), have you done to actively market the book? What have you found most successful? Why? How do you quantify?

My life has essentially become marketing my book. My motto is do more today because what I did yesterday wasn’t enough. My approach has been to get out and meet people. As an independent author with a small publisher (read no marketing budget), I have found the best way to sell my book is to get out and talk to people about it. I’ve done lots of signings, made lots of phone calls and knocked on a bunch of doors. I’m always trying to think of new things to do. Some of them work, but a lot of them don’t. I don’t let the unsuccessful bother me; I just step back, regroup and try something else. I always keep books in the car because you never know when you can turn a trip to a restaurant into a book signing!

When Sean is not writing he practices Family Law and works as a Domestic Mediator. Sean can frequently be found wandering the Lowcountry of South Carolina with his camera, playing guitar in assorted venues around Charleston or exploring the underwater world of the southeastern US.

Sean lives with his wife and two Australian Shepherds in Charleston, South Carolina. The Trust is his debut novel. To learn more, visit Sean’s website.