I asked my friend, Vietnam veteran, teacher, and talented author Michael Burns if he’d consider writing a piece to celebrate Patriot’s Day. I hope you enjoy this poignant, inspirational post.

Terri asked me to say something appropriate about Patriot’s Day. This day is based on the fighting that started on April 19, 1775, on American soil, with about 70 American Patriots up against hundreds of British infantry regulars. The Americans were militiamen who were really farmers, not soldiers. That morning, the British won at Lexington Green and killed eight Americans. Then they advanced on Concord to capitalize on their victory. There was a brief skirmish at Concord, and the British, believing they had triumphed over the ragtag militiamen, began their march back to Boston. As they marched, hundreds of Minutemen answered the call to duty, to patriotism, and began firing at them from behind trees, from behind walls, from behind bushes, and from prone positions on the ground. Over 200 British regulars were killed or wounded.

After that there was more fighting such as the famous Battle of Bunker Hill, but there was also vacillation in the colonies about going to war. In July, the Congress tried to reconcile with the King. They sent him the Olive Branch Petition, which he rejected out of hand. For men like John Adams, this meant war. But others weren’t so sure. The Loyalists didn’t want a revolution. A lot of Americans had serious doubts about fighting the British. America had no real army and weapons were meager. A war would mean serious hardship.

Then something happened that changed a lot of minds. Thomas Paine wrote a tiny book called Common Sense, published in January of 1776. In a population of about two and a half million colonists, the book sold, by some estimates, around 500,000 copies. Paine’s book convinced America that it was time to fight. Later, he wrote The American Crisis, a series of sixteen pamphlets authored by ‘Common Sense.’ The first pamphlet was published on December 23, 1776.

It was a particularly harsh and cold month. Washington’s army had been forced out of New York and had retreated into Pennsylvania. All seemed lost. Thousands of Americans had abandoned their fellow soldiers. An army of over 20,000 men had been reduced to just a few thousand. Morale was ebbing fast.

What did Paine write that December? Probably the most famous words ever written by an American, then and now:

‘These are the times that try men’s souls. The summer soldier and the sunshine patriot will, in this crisis, shrink from the service of his country; but he that stands it now, deserves the thanks of man and woman. Tyranny, like hell, is not easily conquered; yet we have this consolation with us, that the harder the conflict, the more glorious the triumph: ‘

Washington’s army crossed the Delaware River late on December 25, and marched on Trenton, New Jersey, where at dawn they caught the Hessian mercenaries sleeping off a night of revelry. Over a thousand battled-hardened mercenaries were killed, wounded, or captured.

Had I been alive in 1776, I know I would have been a Patriot. I would have been fighting with Washington. Today, the choices aren’t that easy. The Declaration of Independence, adopted by the Congress on July 4, 1776, was also a declaration of war. Today, the Congress no longer declares war. They pass resolutions approving some military action the president wants to embark on. Recently, in Libya, they didn’t even do that. So today, how do we define patriotism when we’re fighting in a foreign war?

Here’s something I wrote in my novel, The Horn:

‘Friends, he knew, fight for each other, especially when they’re in a remote corner of the world. Truman had done enough research about combat to know that when close-in fighting got bad and really ugly, and desperate, Americans would fight to save their friends, especially when they were in a foreign place, far away from home. Patriotism, the American flag, the desire to get home safely-none of it mattered as much as loyalty to those Americans who were right there and with them in the fight…’

When I was drafted and sent to Vietnam, during the last seven months of my tour I volunteered to be on our battalion’s civilian affairs team. Before I had left the States, I remember my father admonishing me never to volunteer for anything. That’s how you get killed, he had said.

One day, I was practicing at a small firing range on a forward fire base with my M-16, shooting at beer cans thirty feet away, firing on semi-automatic from the hip, John Wayne style, and as I was shooting an infantry squad led by a young lieutenant approached to also do some practicing. They saw me shoot a beer can, knock it five feet off the ground, then hit it again in mid-air. When it landed, I hit it again. The squad saw what I had done and they took up a position behind me, watching me as I loaded another magazine into my rifle. Then, I repeated the performance. One of the guys behind me said, ‘We want you in our squad!’ and the word got out in our battalion that I was a fantastic shot.

I’ve never forgotten that day because my next move was to accidently touch the inside of my left forearm with the tip of the muzzle of my rifle, which was red hot. I branded myself and the scar remained there for the next twenty years.

I think the reason why the commanding officer approved of me joining his civilian affairs team was because he had heard I was an expert marksman. Once on the team I acted as security and driver. We had one small truck with a tripod mounted M-60 machine gun in the back. From our base at An Khe in the Central Highlands, we ventured out into remote villages to offer food, clothing, and medical aid to the Vietnamese people, trying to win their hearts and minds. I remember sitting on four or five flak jackets as I drove and with sandbags under my seat in case of mines. The roads were narrow, desolate and lonely.

Looking back at this now, I realize it was insane for me to have volunteered for this assignment. Our team consisted of only a few Americans, an ARVN Vietnamese sergeant who acted as interpreter, and a Montagnard interpreter. Against any sizeable Viet Cong or NVA force, we wouldn’t have stood a chance, but we were lucky. We never ran into such a force.

Out in the villages, I frequently asked the people I encountered what they really thought of the American presence in their country. Every single one of them felt we were intruders and had no business there. They mistrusted us and they mistrusted our motives. It was ironic, though, because as they told me this, they were friendly and almost always smiling. The Vietnamese are a decent people. We were fighting on their soil.

I finished my tour of duty, made a 15 hour flight across the Pacific and separated from the Army, immediately enrolling in college because our civilian affairs team’s commanding officer, Captain Pat McGuire, convinced me that college was the best course of action for me. McGuire and I had many conversations and I admired him immensely. I heard after the war that he had stayed in the Army, but I completely lost touch with him.

Another officer that befriended me, Lieutenant Phillips, wasn’t so lucky. Phillips and I used to play chess outside his hooch, and I sometimes beat him, causing him acute frustration, something I really enjoyed doing. I loved to win, but so did he. Phillips and I had several intense conversations about our presence there, and about other things. He was killed when our battalion was ordered into the Fishhook of Cambodia in 1970. I was told that just before nightfall on the first day of the assault an NVA soldier popped up out of a spider hole and got off a quick shot, hitting him in the head. Over the next few days, our battalion lost many men killed and wounded, including an entire rifle company.

I find the similarities between Vietnam and the American Revolution to be striking. We, like the British, lost the war essentially to a bunch of farmers who were forced, on principle, to turn themselves into formidable fighters, fighting against a superior army that had invaded their country. Were we patriots? I’ll leave that for the historians to answer. For me now, Vietnam seems far away and a long time ago. 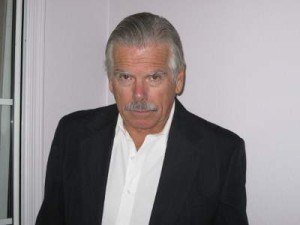 Michael Burns lives and works in Arizona. He has a master’s degree in education from Northern Arizona University and teaches language arts at Tohono O’odham High School in a very remote part of Arizona. He lives in Rio Rico, Arizona with Christine, Bud, and Chewy. His interests include gardening, especially growing flowers and native plants.

He is a Vietnam veteran. He spent thirteen and a half months in the Central Highlands during 1969 and 1970 with the 4th Infantry Division and, for a brief time, with the 173rd Airborne Rangers on LZ English.

“My best asset is my ability to think critically, and then to use that knowledge to be creative. There are certain truths I live by, and I think you’ll see that in my writing if you read my work. I write in different genres because it requires me to do research and learn new things I wouldn’t otherwise learn; so, I have an environmental disaster story, a horror story (my attempt to enthrone myself as the new King of horror), a naval war action story, and a Christian book, which just happens to be my favorite. My next book might be a science fiction story, though I’m not sure about that yet. I am currently studying the work of Joseph Campbell in the hope it will make me a better writer.

“The one thing I don’t want to do is reach a comfortable plateau and find myself stuck there, like so many, writing in the same genre book after book. I want to keep challenging myself, keep learning, and to keep exploring.”