Bri Clark Talks About Writing Series And Being A Womanprenenur

I’m so pleased to be able to interview Bri Clark today. Bri is multi-talented: she’s constantly busy in her roles of author, speaker, promoter, and literary strategist. In addition, Bri is a passionate womanpreneur and champion of the Alpha female!

First, please tell us something about yourself. Tell us a secret.

Well I’m nearly as bitchy as I appear. In fact I’m very kind: foolishly loyal and I lose all common sense when my tempers stirred. That’s why I spent some time in jail. But I digress. I’m an author, speaker, promoter, and literary strategist. Sassy, southern belle, with who takes pride in her history and her curves.

How long have you been writing? What inspires you?

I’ve been writing as a novelist since 2008. I was published in 2011. People inspire me, life, other stories. I’m a ferocious reader. Oh did I mention I’m a reviewer too? For example I work for an intimacy expert and a technologist both of their influences made it in my latest MS.

What are you passionate about? What keeps you awake at night?

Caffeine keeps me up at night. I’m passionate about Alpha women, womenprenuers, the publishing industry, books, and authors,

If a magic carpet would take you anyplace in the world, where would you go? Why?

York, England. And I may get to go if I nail this event I submitted a proposal too.

Sounds exciting! Good luck, Bri! If you could change one thing in your life, what would it be? Why?

I’d have an intern. Cause by gosh I need some help sometimes with little things.

You have four series – The Seduzione Series, The Scent Witch Series, The Glazier Series and The Familial Witch Series. How do you keep all the ideas and characters separate in your mind?

And I just started the Belle series. I have character charts and I’m just really really organized. I usually only work on one series at a time.

Often as writers we’re hit with ideas that we want to explore immediately. How do you juggle it if you’re working on one series and suddenly get a killer idea for one of your other books?

Well I ride the manuscript wave so to speak. Like this weekend I had this AMAZING idea and shut everything else down and wrote 32k in 30 hours.

Of course, as well as being an author you’re also a Literary Strategist and Consultant. Can you tell us more about your work?

This is the hardest question because as a strategist every client gets their own specially tailored ideas and support. But the ‘official’ explanation is: Belle Consulting primarily focuses on working with authors at all stages of their career but does consult with small businesses and entrepreneurs. Some Services Provided *Online Platform Evaluation *Amazon Campaign *Social Media Campaign *Blog Evaluation *Website Evaluation *Branding and Strategy Organization *Career Strategy and Organization *Speaking Strategy

On your blog, you talk about being a womanpreneur and use the amazing phrase: ‘Don’t let guilt be your chief operating officer. Can you share your tips for finding balance?

I’m extremely organized but very flexible. For women it’s all about keeping it together in the mind. Someone else could look at your life and think it is all out of sorts. But if in your own mind you’ve got it together doesn’t mean crap what they think. Tailor your balance to what works for you. Some people are visual they need lists marked off: others are against too much scheduling and like to go by the seat of their pants. I say go in the buff if you want. Do it you own damn way!

Plane, train or automobile? Never been on a train but I’d like to make love on one.

Beer or wine? Not a boozer but I’m an oozer.

Light or dark? Both

Winter or summer? Spring and Fall

Sit on a beach or sit by a fire? Both at same time.

Read or write? Both

Writer’s group or editor? I got a Kate:

If you were to give one tip to aspiring writers, what would it be?

Hire me: No in reality I’d say find three really great blogs that update weekly on the industry and follow them. Learn from them then build off of it. All aspiring authors have day jobs and regular lives to try and juggle with these new endeavors: take a day at a time. But keep doing it every day. Learning, writing, reading.

What are you working on now?

At the moment I’m working on several projects. As I mentioned before I wrote over 30k in 30 hours. This novel is titled Enamored by a Belle. It’s the first in the Belle series. It’s not my usual paranormal romance. It’s much more drama and contemporary. It’s written completely from a male’s POV Nathan Hamilton. Who is an amazing man in so many ways but one really sad way. He meets Aribelle Vonder Sands and she is a real ballbuster. (As my friend Rachel Van Dyken described her.) A true sassy southern belle to the core.

My readers have asked for a book with a Belle so here they go. I’m really loving writing their story.

Also Eternal Witch (have you seen my trailer? OMB!!!) is due back from the editor soon and I’ll be releasing it ASAP. It’s the sequel to The Familial Witch. In conjunction with that I’m organizing a blog tour with KiKi Howell. It’s not just about books but supporting all genres. As in I’m a Sweet Author and she writes Erotica. We believe that readers should have a choice and it’s not about competition or pettiness but about authors supporting authors.

As a strategist and speaker I’m slammed too. In the next week I’ll be speaking at a Global Women’s Summit in Vegas presented by The Women’s Information Network and then come home for 10 hours and head to RomCon in Denver. I’ve also been inducted into the Women’s Speaker Association as a Premier Founding Member. I’m very excited about all those things.

How can your fans connect with you?

No stranger to adversity there are three things that make Bri Clark the ultimate womenpreneur. Failure, Work Ethic, Ambition, Strategy She works as a strategist, author and speaker as well as a consultant and promoter for multiple publishers. She can be found on her personal blog BriClarktheBelleofBoise. Bri is also a featured speaker for the upcoming Idaho Book Extravaganza in additional to her most recent engagements at Ignite Boise and Story Story Night at the Rose Room. After moving to Boise from Tennessee she was quickly dubbed The Belle of Boise for her hospitable nature, forward attitude, and sassy nature. 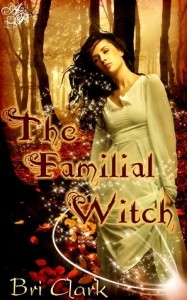 Lucien Lemione the clan leader of the feared and revered Eternals is faced with the ultimate betrayal. His second in command for two centuries has not only created the most grievous of offenses but also commissioned the creation of liquid silver. When poisoned by this toxin, an immortal suffers a fate much worse than death, frozen in an internal prison. After being wounded when found spying, he hides deep within the eerie woods that encircle the Triad Mountains. Desperate and in pain, he prays to an offended mother goddess for help. Her answer: a woman, but not just any woman. A witch.

After losing her entire coven at the hands of the Eternals, Aisleen is the last of her kind. She retreats from the world to Trinity Forest where she is giving the opportunity of a lifetime, or perhaps a test of principles. It’s there she discovers the man she heals is the Eternal that wiped out her people. Although she is bound as a healer, she could be creative in her revenge. Aisleen knows who and what Lucien his: but does not speak of it. There can be no future with Lucien for she can only be with a mortal man. Even if she wanted to be with him, can she forgive the man that caused the genocide of her people?

Lucien must act quickly for the survival of his clan is at stake. However, Aisleen’s ethereal beauty and emerald eyes keep pushing those thoughts far from his mind. Determined to find out what secret she hides, he prolongs his time with her. When his people need him most what will he choose: duty, desire, or will he make his own fate?

You can choose love but you can’t choose destiny.