For the Love of Love: Holly Robinson, author of Sleeping Tigers

I got a text from my brother Donald today. He sent a photo of the canal boats in front of his house. The boats had a thin layer of snow, as if they’d been frosted. I immediately texted him back a photo of trees with an icy pink sheen. Last time, I sent him a picture of a mule with his teeth bared as if he’s laughing. Donald replied with a photo of three spotted pigs.

My brother and I are both walkers who can ramble for miles, but we never do it together. He lives in England and I’m in the U.S. We’ve been apart for 23 years, ever since Donald took a job overseas with a high tech company. He is now more English than not, wearing Wellingtons and wax jackets. It doesn’t matter. I love my brother like nobody else.

Our parents never could have predicted this kind of connection between us. As kids, we were mortal enemies. Donald once bit me so hard that I still have a scar and we routinely gave each other knuckle burns. Every family has labels, and you spend most of your life ripping them off. In ours, I was smart and Donald was wild; he was stubborn and I was sweet.
But brothers and sisters are like relationship laboratories. Your brother is your best friend-when he’s not reducing you to tears. He’s the one you watch to discover what boys are like. You’re the one he turns to when a girl breaks his heart.

‘Why do all of your novels have characters with brothers?’ my daughter asked recently.

The answer is easy: It’s because I miss my brother, still, even after so many more years apart than together.

Journalist Holly Robinson is the author of The Gerbil Farmer’s Daughter: A Memoir and the novels Sleeping Tigers and The Wishing Hill (available July 2 from NAL/Penguin). She holds a B.A. in biology from Clark University and an M.F.A. in creative writing from the University of Massachusetts, Amherst.

I’d never felt so tired. There were probably twenty stairs, but it felt like two hundred. I dropped my backpack in an empty corner in one loft room, where a pair of young women–both of them with short, spiky hair dyed pink–lay reading, legs tucked into sleeping bags.

I crossed the hall in my bare feet. The floor was warm up here because of the kitchen fire. The rain hammered on the tin roof, which leaked like a sieve into various metal pots placed in strategic spots along the floor. The pinging symphony drilled into my skull.

The second floor of the hostel was even smokier than the kitchen, despite the curtain across the stairs. In the men’s loft, the only light emanated from a flickering kerosene lantern at the far end. There wasn’t even a platform bed here, only the wooden floor. It was nearly covered with sleeping bags and wool blankets.

A head protruded from inside a heap of blankets on the left side of the room. I recognized Cam’s tangled pale hair, the only part of him that I could see, and called his name from the doorway. He didn’t answer.

I approached slowly, watching my brother closely for signs of movement, suddenly terrified that he’d died up here without anybody noticing. 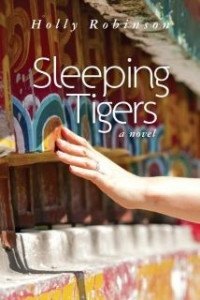 Jordan O’Malley has everything she ever wanted: a job she loves, a beautiful home, and a dependable boyfriend. When her life unravels after a breast cancer scare, Jordan decides to join her wildest childhood friend in San Francisco and track down her drifter brother, Cam, who harbors secrets of his own. When Cam suddenly flees the country, Jordan follows, determined to bring him home. Her journey takes her to the farthest reaches of majestic Nepal, where she encounters tests–and truths–about love and family that she never could have imagined. Funny, heartbreaking, and suspenseful, Sleeping Tigers reminds us all that sometimes it’s better to follow your heart instead of a plan.

Join us tomorrow for pieces from Diane Rinella and Regan Black!