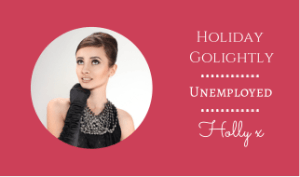 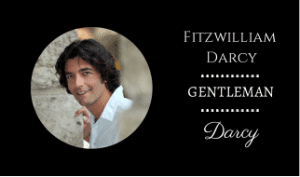 Holiday GolightlyFitzwilliam DarcyWhy we think they could be a good match

Holly was orphaned at a young age and had a fairly tough childhood after being forced to live with some horrible relatives. She and her brother Fred eventually ran away and lived with Doctor Golightly after one of his daughters found them trying to steal some milk.

Holly has a carefree style of living. She tends to look at each day as a holiday and she looks at life as you only live once, so experience everything that you possibly can.

The men that she goes out with are rich and there is an understanding that she will accompany them to places on the promise that she gets a ‘gift’ in return. These gifts range from jewellery to a cheque. Holly lives in hope that one day one of her rich suitors will marry her and she will live a life of comfort.

Mr. Darcy is a wealthy, handsome gentleman and the proprietor of Pemberley, a large estate in Derbyshire, England.

An intelligent and forthright man, he has a tendency to judge too hastily, and his high birth and wealth make him extremely proud and overly conscious of his social status. Others can find his manners to be lacking and that he can be rather snobbish and rude to people, especially if he thinks someone is beneath him.

Because of the privileged life that he has led, Mr. Darcy tends to think that he can get anything that he wants and will get quite annoyed when things don’t go the way that he would like them to.

If you look deeper into his personality, you will find him to have a strong sense of honor and virtue and can be a fair man.

We believe they could be a good match. They are from opposite ends of the class system, but we believe that they would be good for each other.
Over the years, they have both used people and because of their good looks they are both very vain and use their looks to capture people and to get what they want.

Holly is quite feisty and would stand up to Mr Darcy and wouldn’t be afraid to tell him if he offended her or was rude. Mr Darcy’s wealth would also please Holly, as she likes her men to be rich and have to capabilities to allow her a comfortable life.

Mr Darcy would at first look down on Holly, he would see her as beneath him and therefore not worthy of his attentions, but her good looks and personality would help him warm to her and he would like the way that she wasn’t afraid to stand up to him and this he would respect.

These are our thoughts, now we are interested to hear your thoughts and if this match would be stupid or cupid.

About the Author: Emma Gordon

Emma has worked for 10 years as an Executive PA in the Oil and Gas Industry in London, England, before starting her own Virtual Assistance business called Spiral Orange Business Solutions. Through her business she helps clients with their administration and marketing needs, plus enjoys writing blogs, articles and organising peoples diaries, emails and travel arrangements. In her spare time she loves to travel, cook, listen to music and read a great book. keep an eye out for her blog at: http://spiralorange.blogspot.co.uk/