On the MenuAbout the BookAbout Crystal Marcos 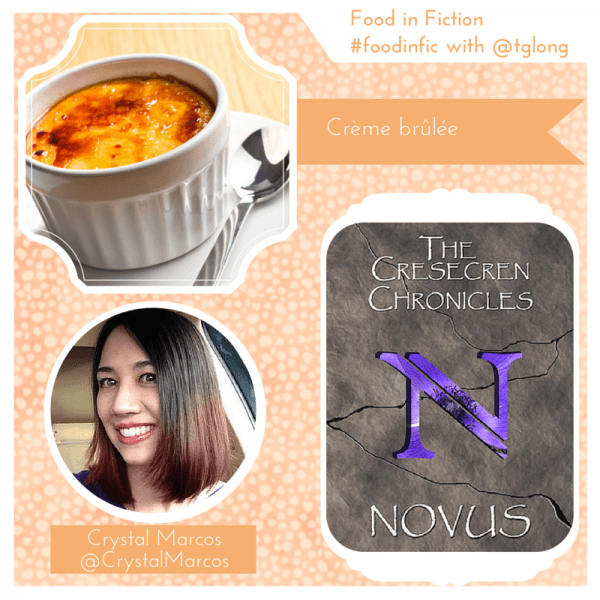 Who is eating? Why? What is the occasion? Cayden and his companions are eating. They are on a perilous journey and taken in by Lady Verleah who feeds them a handsome meal fit for the wealthy.

The servants soon brought out the food on a metal rolling cart. Instead of family-style dining, we were served in courses: salad, soup, entrée, and dessert. I remembered serving the Rawnetts that way but had never eaten like that myself. I rather enjoyed it. I know we all did. I also had never eaten that much food in one sitting in my life. When it was time for dessert, the shelves of the cart were filled with mouth-watering sweets: crème brûlée, tarts, cakes, scones, and other desserts I had only dreamed about. I had an exceedingly hard time choosing. To be truthful, I was not even hungry by that point but could not resist the tantalizing aromas. I made sure to eat everything I was given and would not allow anything to be wasted. It took us almost two hours to complete our dining experience. I knew I would probably never eat that way again. Only the extremely wealthy had access to those types of food.

“Wine? You have wine glasses. I suppose you have wine to go in them?” Famous asked Henner, the male servant, midway through the meal.

Henner rolled his eyes and grumbled as he left the car. A few minutes later he returned with a bottle of what was probably the cheapest wine he could find. 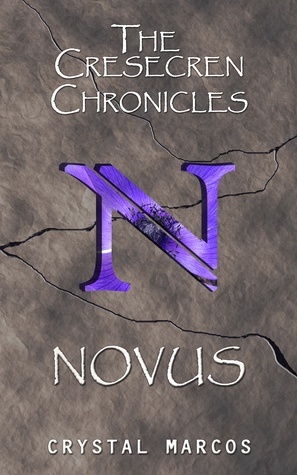 Being a teenager is hard enough. And what if your life’s path is predetermined? On top of that, you aren’t even Human?

Cayden was given life as a Cresecren. He expected to live out his days with the dysfunctional Human family he was assigned to serve. One fateful night, however, landed him in Gavaron, the home of maimed, elderly, or defiant Cresecren.

Beyond its borders is the Den, an area much more dangerous than he ever imagined. Now seventeen, Cayden unwittingly becomes involved in a conspiracy and is one of a handful of survivors fleeing a deadly attack. They set off on a perilous journey in search of refuge and the truth. Along the way, Cayden begins to comprehend the difference between fully living and merely surviving, while trying to balance his emotions and a forbidden love.

Award-winning author Crystal Marcos has been a storyteller her entire life. As the oldest of five children, she had to do a lot of entertaining. She lives on the Kitsap Peninsula in Washington State with her husband and daughter Kaylee, with another child on the way. Crystal is the author of BELLYACHE: A Delicious Tale and HEADACHE: The Hair-Raising Sequel to BELLYACHE. Novus, her third book and first Young Adult novel, is Book One of The Cresecren Chronicles.

On the MenuAbout the BookAbout Crystal Marcos 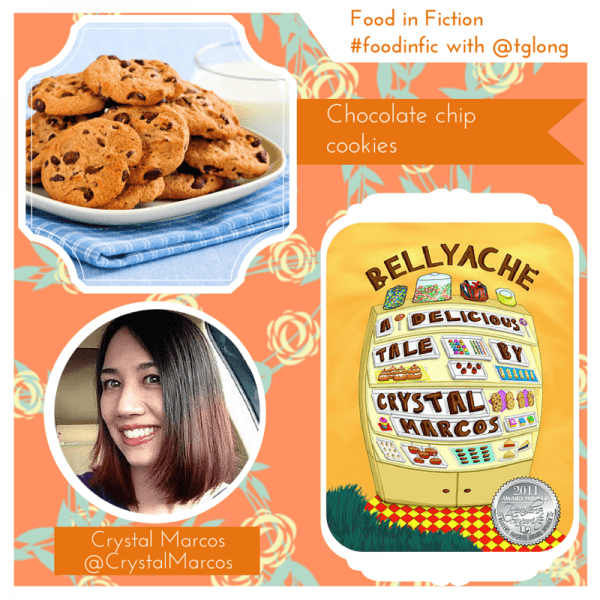 Who is eating? Why? What is the occasion? Peter is having lunch with his Nana and Papa after sneaking sweets all day at Papa’s sweet shop.

“Papa and I decided since you were such a good helper today that you could have a cookie for dessert,” Nana said, handing Peter a cookie.

Peter took it even though he did not want it.

“Thank you,” Peter almost whispered. He stared at it and thought maybe if he stared at it hard enough, it would disappear. When he looked up, Nana and Papa had almost finished their cookies. Nana smiled back at Peter. There was chocolate on her front tooth.

Peter’s stomach churned. He knew he had to eat the cookie or they might suspect something. He never turned down sweets from Papa or Nana, ever. Maybe they would get up before he was done and he could hide the cookie in his shoe or flush it down the toilet. No such luck. Peter ate small bites in between talking and kept thinking that when his stomach could no longer be controlled by his cargo shorts, the button was going to pop off and hit Nana right in the middle of her forehead. He almost giggled at the thought.

Finally, he was done. No more eating until dinner or maybe not even then. He felt sick, sick like the time he saw Curtis Wheeler throw up in the cafeteria all over Hanna Dell. 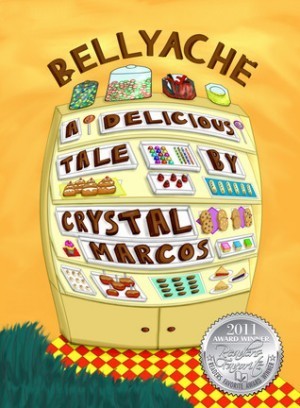 A lip-smacking, mouthwatering, absolutely delectable debut, BELLYACHE: A Delicious Tale by Crystal Marcos is a literary feast for ages seven and up. In the vein of Roald Dahl’s best-loved adventures, Marcos offers a mystical, character driven escapade that intertwines strands of reality with a larger-than-life fantasy world. When Peter Fischer sets out to help his grandfather at Papa’s Sweet Shop, he will quickly learn that sneaking sweets and covering up his sugar-dusted tracks will have major consequences. As Peter is transported to a mysteriously delicious, faraway land, a curious people known as the Candonites, some of whom have no time for a non-Candonite, will teach Peter a lesson on what it means to be different and what it means to forgive.

Award-winning author Crystal Marcos has been a storyteller her entire life. As the oldest of five children, she had to do a lot of entertaining. She lives on the Kitsap Peninsula in Washington State with her husband and daughter Kaylee, with another child on the way. Crystal is the author of BELLYACHE: A Delicious Tale and HEADACHE: The Hair-Raising Sequel to BELLYACHE. Novus, her third book and first Young Adult novel, is Book One of The Cresecren Chronicles.