COOKIES (from The Convict, the Rookie Card, and the Redemption of Gertie Thump by Becky Lyn Rickman)

On the MenuAbout the BookAbout Becky Lyn Rickman 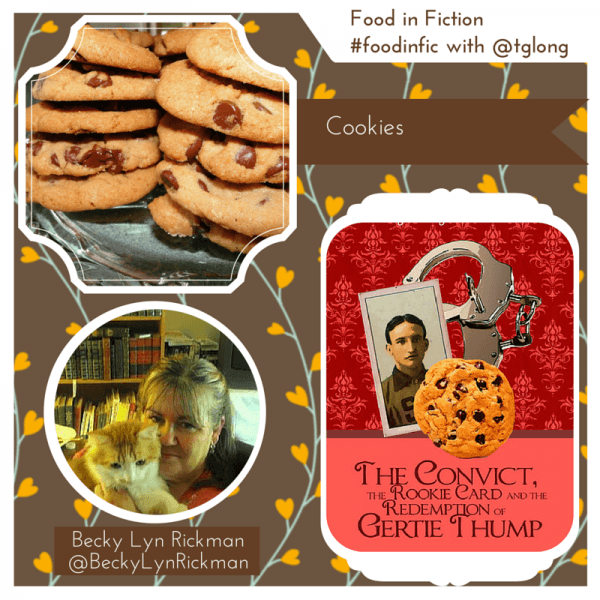 Food/drink mentioned: 12 plates of cookies, each with a poison scriptures tag attached!

Who is eating? Why? What is the occasion? With the whole down despising her, Gertie Thump is suspicious about the cookies that mysteriously showed up on her doorstep She doesn’t touch them. However, when she gave one to her dog, Rasputin, he almost immediately fell ill and stopped breathing.

There on the front porch were 12 batches of cookies, each batch on a paper doily lined plate, and each one tagged with a hand-written Bible passage.

She then mosied back to the table and spread the plates in a circle as if setting places for 12 guests and began to study them, beginning at the plate of snicker doodles in the one o’clock position. She noted that certain words were underlined. She read each scripture and then read just the underlined words the second time through. She got a sick feeling in the pit of her stomach as she went through them.

Matthew 24:43: But know this, that if the good man (or evil woman) of the house had known in what watch the thief would come, he would have watched and would not have suffered his (or her) house to be broken up.

“That’s creepy. What do you think, Rasputin? It almost seems like someone is trying to tell me something.”

She went on to the two o’clock plate of chocolate chip cookies.

Judges 12:13: And the angel of the Lord said unto Manoah, Of all that I said unto the woman let her beware. 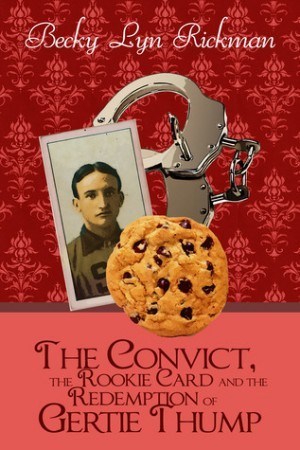 Rosedale has a thorn, and her name is Gertie Thump.

When folks see her walking down the sidewalk, they cross to the other side of the street. Gertie’s mission in life is to improve Rosedale’s citizenry through a steady stream of belittling, correction, and harassment. The only person unfazed by her campaign is the town’s deputy sheriff, Seth Randall, who has his own mission. Seth also serves as associate pastor of a local church, and he will not rest until he saves Gertie’s soul.

But redemption is a word easier said than done. Add Gertie’s childhood friend turned convict, an extremely valuable rookie baseball card, and a plate of cookies delivered with threatening messages, and you’ve got yourself a hornet’s nest of trouble.

When the people of Rosedale come together to save Gertie Thump, the one person they would rather not, Gertie’s not the only one who discovers every good person has a little darkness in them and every demon a little tenderness.

Becky Lyn Rickman writes because it is the only way to placate the voices in her head so she doesn’t miss out on that precious 45 minutes of sleep every night. Life can become a little congested for her in her 400 sq. ft. apartment where she lives, intentionally, like a mushroom, pounding her keyboard in the dark with the unwanted assistance of her two therapy cats, Mr. Bingley and Mr. Darcy. Yes, they are Austenian. She spends a few hours each day shamefully lamenting the fact that her faith won’t allow her to be a profanity-spewing, bourbon-guzzling, burning-the-midnight-oil chain smoker. The rest of the time, she spends in shameless gratitude that her children have not, as yet, put her away.

BLUEBERRY DELIGHT (from A Season for Killing Blondes by Joanne Guidoccio)

On the MenuAbout the BookAbout Joanne Guidoccio 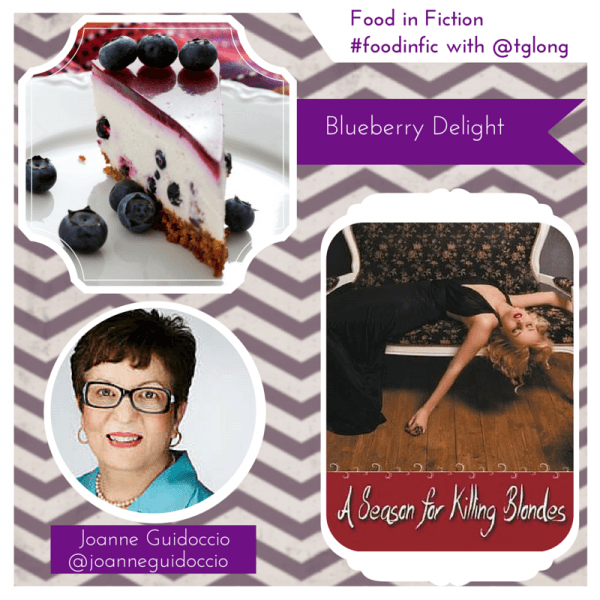 Find out more about Blueberry Delight on Joanne’s website!

Who is eating? Why? What is the occasion? Self-proclaimed non-foodie Gilda Greco envies the gift her cousin Sofia shares with all foodies worldwide. While having dinner at a newly opened Greek restaurant, Gilda can only watch as Sofia expertly dissects a delicious Blueberry Delight cheesecake.

Carlo had removed his suit jacket and rolled up the sleeves of his light blue dress shirt. His tie lay on the desk. The rumpled look suited him to a tee. And his large black-rimmed glasses accentuated those unforgettable blue eyes. Bluer than blue. Sky blue. Cornflower blue. Robin’s egg blue. Years ago, Adele Martino and I had come up with thirty-seven descriptions of Carlo Fantin’s eyes when Mrs. Gillespie assigned one of her Monday morning English composition exercises. As I tried to recall the other thirty-three, I realized that Carlo was speaking to me.

Darn! Another officer in the room, and I had missed his name and more importantly, his title. Was he a detective or a constable? I’m sure Sofia would know. In the meantime, I better stop daydreaming and start listening. I nodded in the direction of the beefy officer. Dark hair. Dark eyes. Expertly trimmed moustache. A big bear of a man who reminded me of Magnum P.I.

Carlo cleared his throat. He was ready to get down to business. Police business. “It appears that Carrie Ann was your first client. You haven’t opened this office for business yet. How did that happen?” 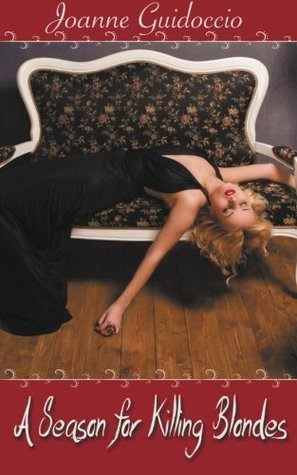 Hours before the opening of her career counseling practice, Gilda Greco discovers the body of golden girl, Carrie Ann Godfrey, neatly arranged in the dumpster outside Gilda’s office. Gilda’s life and budding career are stalled as Detective Carlo Fantin, her former high school crush, conducts the investigation. When three more dead blondes turn up, all brutally strangled and deposited near Gilda’s favorite haunts, she is pegged as a prime suspect for the murders.

Frustrated by Carlo’s chilly detective persona and the mean girl antics of Carrie Ann’s meddling relatives, Gilda decides to launch her own investigation. She discovers a gaggle of suspects, among them a yoga instructor in need of anger management training, a lecherous photographer, and fourteen ex-boyfriends.

As the puzzle pieces fall into place, shocking revelations emerge, forcing Gilda to confront the envy and deceit she has long overlooked.

In 2008, Joanne took advantage of early retirement and decided to launch a second career that would tap into her creative side and utilize her well-honed organizational skills. Slowly, a writing practice emerged. Her articles and book reviews were published in newspapers, magazines, and online. When she tried her hand at fiction, she made reinvention a recurring theme in her novels and short stories. A member of Sisters in Crime, Crime Writers of Canada, and Romance Writers of America, Joanne writes paranormal romance, cozy mysteries, and inspirational literature from her home base of Guelph, Ontario.