A Week of Holiday Wellness: Running Toward Wellbeing – David Brown

Welcome to our Week of Holiday Wellness! Writing the Christmas story I’ll share on Thursday, I thought about the ways memory shapes and defines our experiences of people and events. If memory shapes our perceptions of others, then our actions shape their perceptions as well. Asking questions about memory forces us to ask how we want to be remembered and, in a deeper sense, what kind of life we want to lead.

This week I am pleased and honored to host four wonderful writers and friends, each of whom, through his or her words and actions, leads a life informed by kindness and generosity of spirit. Over the coming days, they’ll offer their unique perspectives on wellness and wellbeing, and offer helpful advice for staying physically and emotionally healthy through the holiday season.

Please join the conversation – share your own tips and advice in the comments section! If a post moves you, please consider sharing with your family and friends. Thank you so much!

I’m thrilled to welcome David Brown today. Dave is a wonderfully talented writer, a historian, a caring, supportive friend. His moving post, on his passion for running, is alive with the sights and sounds of an English forest. Life is busy, stressful, full of distraction. Dave reminds us of the importance of carving out time for ourselves, to meet a new challenge, pursue something we love, or simply—vitally—to find inner peace. 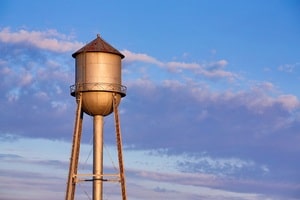 I’m running alongside Huddersfield Canal between Linthwaite and Slaithwaite. My breathing is still steady but there’s a mild ache starting to develop in the soles of my feet as they strike the uneven, dirt path adjacent to the calm water. I’m only around 3km into the run when I reach one of my favourite spots and follow the same routine: a glance to the right where my eyes fix on a water tower by the side of a quiet farm. I don’t know what fascinates me so much about the tower but it’s a highlight of this run I find myself on and my awe won’t be abated on the way back.

At school I never excelled in P.E. When the ardent footballers were chosen as captains and built their teams, yours truly was one of the last to be selected and would be left as a reluctant defender or very anxious goalkeeper for his troubles. I wasn’t great at either, though I did once save a penalty, but not the follow up shot! Football, rugby, cricket, hockey, I took part in them all but was master of none. My performances didn’t even equate to the adequate point on the quality scale. I even had a go at baseball once, all of us minus gloves, and I soon learned how beneficial those gloves are; the scar on my left hand testament to a harsh lesson.

When summer came round I finally had one event that I could consider myself good at: 100m & 200m running. I was always tall at school and friends used to jest that I didn’t actually run, instead I would stride down the track, keeping myself in contention for the lead and even winning some races. It was my only positive from P.E. I was even chosen to represent my class in the 100m and 200m races at our school’s sports day and was even in the relay. What I took from school was that I was a sprinter and not a long distance runner. Anything above 200m was a struggle for me.

Every school term we had to do cross country running and rumours always abounded that our teacher would set off in pursuit of us and if he caught up we had to run the race again. To this day, I’m not sure if those rumours were true. What I do recall is my time of 15.52 in my first cross country run, one I never managed to beat again, despite not knowing the route on my first attempt!

I left school in 1998 and left all the types of running behind. Kind of. Every few years I’d decide to take running up as a New Year Resolution but always found an excuse not to continue. That all changed in 2012.

I don’t recall what prompted me to be on the NHS website but I stumbled upon a fitness programme known as Couch to 5k. The promo video had a young woman talking about how in 9 weeks this programme could take you from being a non-runner to running either 5k or the equivalent of half an hour without stopping. Truth be told, I was intrigued. Having landed in my 30s I wasn’t sure the days of short distance running were part of my repertoire anymore but the prospect of long distance running without stopping did appeal. I wanted to get fit. I’m not the type that is comfortable working out in a gym though, so a solo venture like running seemed the best fit.

The Couch to 5k programme demanded three sessions a week for 9 weeks and in that time I would be running a 5k distance without my life flashing before my eyes. That was the theory anyway. I remember the first few sessions had you running 8 times for 1 minute at a time. Runs 1-5 were okay but 6-8 very nearly ended me. How, I wondered, was I going to complete this programme if 60 seconds of running seemed too much? 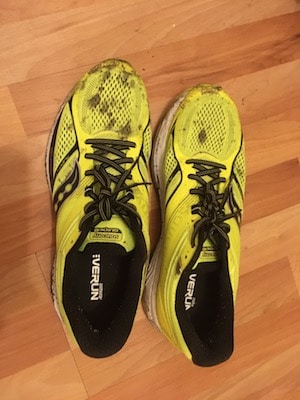 A recent addition – they won’t stay bright for long!

As the weeks went by I found myself gradually increasing my running time. From 1 minute, to 1.5 minutes, 3 minutes, 5 minutes, it was all very steady until the awful day I was told that I’d be running for 20 minutes without stopping! I did it, somehow, and as I reached Week 9 I couldn’t believe it. After running the 27th and final session of Couch to 5k I was on my way. In professional running circles, a 5k is a mild distance but to me it was scaling Everest.

Five years on I regularly run 5k 10k, 16k and even the half-marathon distance of 21k. I have loved and lost numerous pairs of running shoes over the years and discovered strength and determination that I never believed possible. I’ve set myself many challenges in life, many of them I have failed in and given up, but running has remained a constant. Sometimes I’ll have a bad session where my time is pitifully slow compared to what I have previously achieved but it doesn’t stop me coming back for more a day or two later.

In terms of competitiveness, I compete only with myself. I guess this guarantees that I’ll always win, but will also always lose. I strive to be faster and to cover great distances more comfortably. When I first started it would take me 30 minutes to run a 5k. Today I have dipped below 22 minutes; 47 minutes for 10k and under 2 hours for 21k. The distances, the calories burned, the pacing, all of the data interests me but it pales in comparison to what running truly gives to me and why I continue to do it. 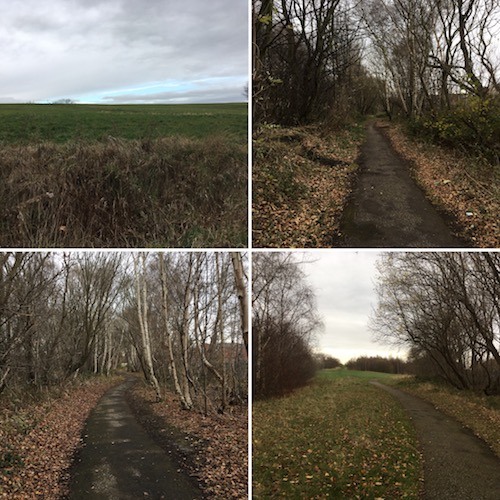 I’m 35 now and one thing I am certain of is that life is hard. For some, life is easier than it is for others. The Fates deal all of us a different hand of cards and we make of this what we will. I don’t profess to have suffered more than most, for that would be a lie, but life has at times been difficult, though the damage is often to those I love and cherish, as opposed to myself. For most of us, escapism is a necessary part of life. Some find solace in a film, others seek sanctuary in the pages of a book, or a serene walk in the countryside. There are a multitude of ways to escape for a time. For me, my haven is in running, 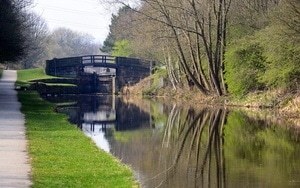 Whenever I run I am conscious of the distance I’m covering and even the speed I am going but after a few minutes I enter a tranquil plain within my mind. This works best away from the main roads. When I lived in Milnsbridge it used to be Huddersfield Canal that gave me that sense of escape I needed. Now I am in Barnsley it is along the Transpennine Trail, an intricate series of paths through rural idylls that covers a large proportion of Northern England. I’ll never explore it in its entirety in my lifetime but one of the many entrances to the trail is only five minutes down the road. Perfect.

The Transpennine Trail offers both concrete and dirt paths, a useful variety for any runner. While I eject myself from the real world for a time I might find myself crossing a bridge that was once an old railway line in Barnsley’s industrial age when the town once thrived; I might navigate a difficult stretch across a farmer’s field; later I could find myself surrounded by trees and rolling fields, or even pass a go kart track on the way down to Wombwell. Wherever I run there is history, some long since written, some just beginning and I take it all in with every movement of my feet, every beat of my heart and every laboured breath from my lungs. You could describe it as a metaphor for running away from one’s problems or stepping out of the obstacles that life throws at so many of us. 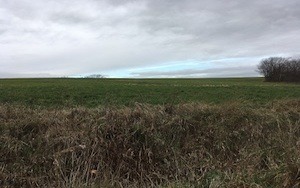 I took up running to become fitter but found something beyond a workout for my legs and heart. There is something almost spiritual about running. The level of escapism it offers is a great way to alleviate anxiety and woes but it also presents a test, an opportunity to strengthen mind and body. When you’re running your body inevitably begins to tire, ache, maybe even feel pain and the battle between body and mind ensues. It also becomes a duel between the toughest opponent you will ever face: yourself.

I have fought through that test on many occasions. While other challenges would have led to me throwing in the towel and never coming back, this hasn’t happened with running. I have pushed myself to 10k, 16k, 21k when my legs have turned to jelly, my throat is dry and I can hear my own voice telling me to stop, that there is no shame in falling a little short today. I’ve sometimes stopped at 16k rather than push on to 21k but I’ve yet to stop at 20k when 21k is so close. It seems a shame to stop at that point.

In 2018 I am considering entering races for the first time, not through any desire to win but to push myself harder than I have in training. As exhilarating as I understand races are, I can’t see them comparing with my solo running, but I might be wrong, just as I was about running. When I started Couch to 5k in 2012 I didn’t believe I’d complete the nine-week programme. Five years on I never want this running journey to end.

A cat dad, author/blogger, runner, historian, bookworm, film buff, and music lover. David has spent the last two years completing his teaching qualification and is currently working towards an MA in Military History. In between running, of course…