Following on from last week’s earlier posts from Luz Aguirre and Mary Ellen Sanger of Mano a Mano, Carolina Drake joins me today! 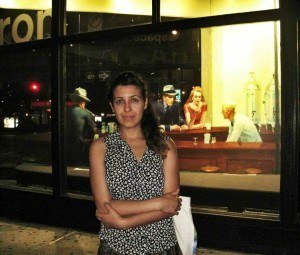 Given my background, I speak both Spanish and English and love reading literature in both languages. In November, I attended the Latin American Poetry Festival in NYC and heard Puerto Rican poet, Mayrim Cruz-Bernal read about the solitude of islands and the rain in San Juan. She wrote in Spanish about the conventional, and the domestic, but kept fundamental links towards the universal. I liked that she extracted conversations from experiences she had in hair salons or taxicabs, and included them in her pieces. When I asked her about her book, she mentioned that it was not translated to English, so this gave me an idea. I started reviewing new works in Spanish by Latin American female writers, and translating some of their poems into English, with the goal of opening up their works to English speaking audiences. The following excerpt is from a piece I wrote in my blog about this subject.

Here in New York City I am part of a taller, a writer’s workshop in Spanish, that meets every Monday and is correspondently named Los Lunes. Once a week, individuals from all over the Spanish speaking countries read works of Latin American writers and afterwards, we write. I say this because a number of us attended the festival to get a sense of what is going on in the current Hispanic writing scene. Immediately after the festival ended, we walked up to Mairym and asked if she could have dinner with us and share more of her poetry because we simply wanted her words to stay a little longer. She agreed, and we were surprised when she mentioned that her weekly writing group in San Juan meets Los Martes, on Tuesdays. So, in between days, and picking a Sunday to unfold an unholy communion of truth, un-truth, and words, we met with her at a restaurant in the West side.

I found her sitting at the side of the table near her husband, Pedro Salicrup who also writes. Most of my fellows from the taller had already arrived and were sharing conversations with her. She was wearing a gold colored necklace shaped like a key chain, blonde hair over her shoulders and a bohemian white blouse. Throughout the dinner, the sounds of laughter and loud conversation played in the background so typical of NYC life, where silence is sacred and discretely unattainable.

A familiar figure in the cultural and countercultural Latin American poetry scene, Cruz-Bernal’s new book Cielo Pájaro Nuestro is her 13th publication that collects nine years of work. When I asked her about the title, she showed us an image of a sky so blue and daunting, a conglomeration of heavy clouds outside her home in San Juan. The image was passed around the table while Cruz-Bernal explained that the cielopájaro is the figure of a bird with open wings, drawn by the clouds at sunset, as a result, the title for her book. In New York, where mostly skyscrapers and buildings inhabit the skyline, I have seen many birds flying in groups, migrating from here to there, but I’ve yet to see a cielopájaro, a figure constructed by chance in the drawings of the clouds, appearing at the end of a day and disclosing the beginning of twilight.

I am a NYC based teacher and writer who has published in Spanish and English. I am originally from Buenos Ayres, the southern capital of Latin America made of British railroads, ports crowded with ships founded by working class Italian and German immigrants, the constant nostalgia of tango music, and the place where James Joyce’s character Eveline wanted to escape to.

As a writer and reporter, I was always pulled towards the small, carefully-constructed narratives of the ordinary and the hungry, people looking for something, just like I was. But I also needed to understand the underlying power relationships behind discourse, oppression, and discrimination. I looked for different ways to craft critical arguments and give a global angle to my stories. Always using the never ending, diverse resources of NYC as a platform for my real life education, my “university of the streets” which also schooled me.

Please follow me at:  http://areyouhungup.wordpress.com/  to recover a new dimension of thinking about things, and to read my  coverage of stories, critical inquiries about Latin American literature, art, and fiction, in Spanish and English.