A Week with Jessica Treadway: Excerpt from Lacy Eye

If you missed Monday’s introduction, click here to visit. You can also catch Part One of Jessica’s interview here. 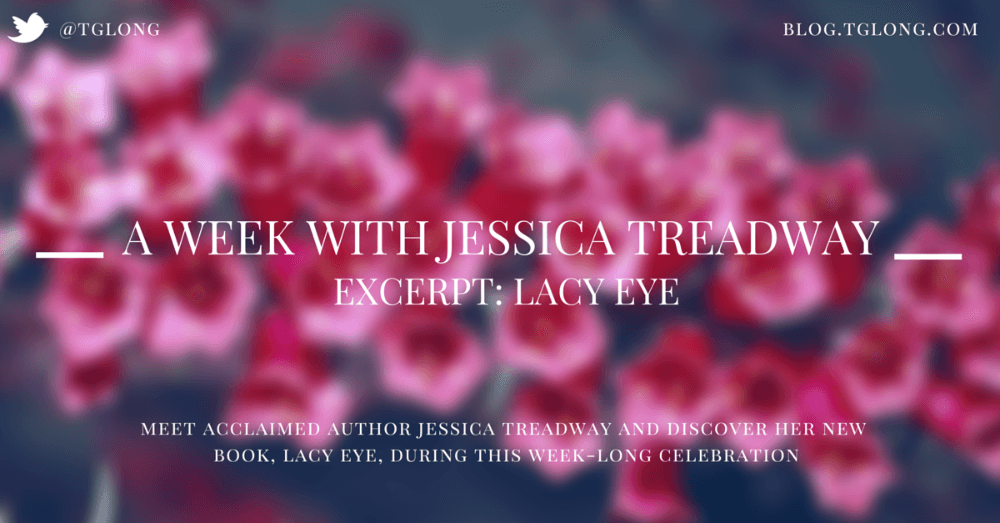 It would never have occurred to me – or to anyone, I’m sure – that Dawn might be contemplating an audition for the school play. I found out the day I got home early after a dentist appointment. She didn’t know I was there. I admit it: I sneaked in on her. Even before I heard the music coming upstairs, a different vibration I felt as I stepped into the house – having nothing to do with sound – kept me from calling out that I was home.

Abby didn’t come to greet me, so I knew they were both up in Dawn’s room with the door closed. Usually, that meant they were together on the bed. If I knocked and then stuck my head in, Dawn always seemed to be scrambling for whatever textbook was nearest, and I always sensed she was trying to hide the fact that she’d just been lying there, looking at the walls or the ceiling as she stroked Abby’s head.

This day, I took my shoes off at the bottom of the stairs, walked up quietly, and stood outside the room, humming in my own head to the familiar tune of “What I Did For Love” coming from the other side of the wall. I remembered how I’d felt hearing the song on stage when we’d all gone to a regional production of A Chorus Line a few summers earlier in western Massachusetts – the chill on my arms and the catch in my throat as the character Diana sang that poignant line “Wish me luck, the same to you,” which I found so moving that I found myself humming it for months afterward, even when I wasn’t consciously summoning the words. Sitting in the audience between my daughters, I could tell that Iris was embarrassed by my emotion, while Dawn patted me on the arm and leaned close to whisper, “Me too, Mommy.”

Standing outside Dawn’s door, I knocked as I always did, but she must not have heard me. When I opened the door, I saw her standing with her back to me, watching herself in the bureau mirror as she finished singing with a flourish. For a disorienting moment, I lost track of which daughter I’d walked in on; her voice was so confident, and her movement so graceful and un-Dawn-like, that it seemed impossible I had the right room.

But of course, I did. On the last note she noticed me behind her and cut herself short, giving a little cry and wrapping her arms around her middle as if it needed protecting.

“What do you mean?” She pulled a sweater around her and gave me a look that was a mix of suspicion, resentment, and – this is the hardest part to remember — hope.

“What do I mean? That was incredible.”

“You’re just saying that.” But she was blushing, and I saw the ghost of a smile as she reached down to scratch Abby between the ears.

“I’m not just saying that. Why would I? Besides, we told you what Mrs. Karp said, way back in fifth grade. ‘Gifted.’ That’s the word she used.”

“They say ‘gifted’ about everybody, Mommy. It doesn’t mean anything.” But there was the blush again, and the smile, with more body this time.

“Dawn. Really. That was beautiful.” Then I identified, creeping into my heart, a feeling I wish to this day I had rejected, refused to recognize, been able to ignore: dread.

Of course I loved the idea of Dawn standing up in the auditorium for her try-out, bowling over everyone with the sounds I had just heard, and even more I loved the vision I had in that moment of her inhabiting the stage on opening night and shocking everyone with her rendition of that song.

But (this is the part it hurts so much to acknowledge) as excited as I felt by that prospect, I felt the dread even more powerfully, remembering the night in fifth grade when she fled the stage in chagrin. There were still kids, five years later, who called her “Upchuck” when they passed her in the halls.

Even more painful to remember than the feeling of apprehension itself is the moment I realized that Dawn could see it in my face. I tried to erase it, and to sound only enthusiastic when I asked her, “Are you going to try out?”

“I don’t know. I was thinking about it.” But the air had gone out of her shoulders, and she flopped down on the bed.

“You should!” When she winced, I told myself to scale it back. “I mean, why not?”

“Because I might get up there and puke, that’s why.” A wry twist of her mouth. “Don’t tell me you’re not thinking the same thing.”

“That was a long time ago. You didn’t know how to manage your feelings.”

“Oh, like I know now.” But she was still smiling, the way she might if we had a private joke between us. “I don’t think so, Mommy. It’s too much like a dream. Standing up in front of all those people? Singing? It isn’t me.”

“But it would be you. That’s the whole point.”

She clucked, waving away what I had intended, too late, as encouragement. The moment when she thought she might achieve her dream had passed, and we both knew it. Even now, thinking about it, I feel shame burning in my chest. I’d tried to convince myself it was Dawn I was trying to save from repeating the humiliation she had suffered the first time. What I find too much to let in, most days, is the possibility that I was also trying to save myself.

On Thursday, Jessica will be discussing Lacy Eye in more detail in Part Two of her interview!