If you missed Monday’s introduction, click here to visit! You can also read Part One of Jessica’s interview or read an excerpt from Lacy Eye. 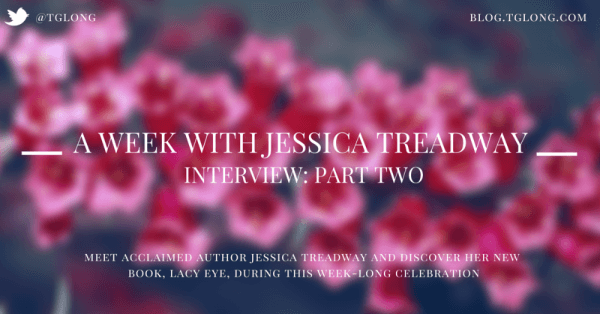 As I've mentioned to you, I found your portrayal of the Schutt family tremendously rich and compelling. Would you be willing to share with us your process in creating these characters?
Thank you very much for the compliment. It means a lot because the dynamic among the four family members was one of the hardest things about this book for me, because there were so many permutations to try to get right: parents with each other, each parent with each child, children with each other. The characters of the mother-narrator, Hanna, and her older daughter, Iris, went through changes in how I portrayed them, at different times. The character of the father and of the younger daughter, Dawn, remained pretty stable throughout.
Where, for you, do character details come from?
Mostly through gesture, speech, and action. I’m not one who ever actually pictures what my characters look like, except in a very vague sense. And I know that many readers like physical descriptions, so I try to remember to include them. It doesn’t come naturally to me, because I am inhabiting them as I write, so I’m not looking at them, the same way I’m not looking at myself.
I'm awed by your insightful portrayal of sister and mother daughter relationships. Would you be willing to share your thought and or writing process in creating these characters?
Well, I have two younger sisters and a mother, though of course I must hasten to say that this is a book of fiction, so my characters weren’t based on anyone I actually know or love. But I know what it is like to be a sister and a daughter. I don’t have children myself, so depicting Hanna required a combination of observation, knowledge and information from others, imagination, and empathy. I’m very glad if it seems like the portrayal of a “real” mother. Actually, it’s occurred to me that it might have been harder to write this book if I had been a mother, because I would have the templates of my real child(ren) in a space that was, for me, empty instead – the blank canvas I needed to create the fictional kids. And imagine if I did have a daughter, who might have to keep proving to people that she’s not like Dawn! I wouldn’t wish that on anyone.
Which character do you like most?
I like Hanna the most because she faces up to the difficult challenge of seeking the truth even though she is afraid she might not be able to bear it.
Least? Why?
The murderer, Rud Petty. I not only like him least, I am the least interested in him, because he’s essentially a sociopath, which means he’s completely one-dimensional as a character: everything he does is motivated by wanting what he wants when he wants it (where did I hear that before?!), no matter what he has to do or who he has to hurt in the process.
Where did the idea for this story come from? How did you build on this?
The novel is based on a crime in my hometown. A college-age son was convicted of killing his father and attempting to kill his mother, and in the real-life case, the mother originally identified her son as her attacker before later saying that she could not remember that not and that he could never have done such a thing. I was fascinated by that detail, but changed it in my novel to be about a daughter with a sketchy boyfriend, rather than a son, because I thought that would be a more interesting relationship to explore – that of a mother with a grown child who is vulnerable to a bad person, but who may or may not be a bad person herself.
What influenced your decision to structure the book as you have? Hanna, the mom, is working with impaired memory. Did this play into plot or structural decisions?
Not so much her memory impairment played into the structure, but the fact that at different turns she was susceptible to wanting to hide the truth from herself. It was difficult to write a first-person narrative from the point of view of someone with this tendency, so I realized it had to be a retrospective narrative, informed by the insight and realizations Hanna had gained between the time she experienced something and the time she reported it.
Did the plot emerge fully formed in your first draft? Or did you shape it over multiple drafts?
There were more drafts than I would ever want to count! Many, many drafts. Some scenes remained essentially the same from the first time I wrote them, and some changed drastically over time. And I wrote many scenes that never made it into the book. I wish it had emerged fully formed – that sounds like a dream to me.
What is your favorite of your four books? Why?
I think that my favorite is my last collection of stories, Please Come Back To Me. I think I’m a better story writer than I am a novelist, and that story collection is more mature than my first.
Is there anything else you'd like to add?
Nothing I can think of – thank you for the wonderful and generous questions!

Visit again tomorrow when Jessica will be sharing some of her favorite short quotes from the book!