Indie publishing – the good, the bad, the ugly & the incredibly inspiring

I recently posted an article on my blog about what was good, bad and ugly about Hunger Games, the book and the movie. I discovered that it’s a good framework for evaluation, so I decided to look at Indie publishing in the same way. However, as you can see from the title of the post, I felt I needed to add one more category because I find the Indie movement so inspiring that it goes beyond good. The other interesting thing is that some of the good points about Indie publishing are the same as the bad points. It depends on the author’s skills as to whether the good outweighs the bad enough to take the plunge.

Freedom & control. They sound diametrically opposed, but in this case, they aren’t, because you have the freedom to take control of your own work and retain all rights to it. You decide what you want to publish, when to publish it, what kind of cover you want (so long as you can afford it), who’s going to edit it (hopefully you can afford them) and everything else involved in getting a book out there.

You’re also free of the traditional publishing round about. What a relief it is to decide to simply not bother sending queries to agents and publishers, and not to have to wait, sometimes for years, for a response from publishers. (Two years after she started, my agent is still trying to find a publisher for one of my books. If she hasn’t found one by the end of July, my publishing company will be releasing that one too.)

You’re in control. That doesn’t mean you have to do it all yourself, that would be unwise even if it was possible, it means that the buck stops with you – you’re the one who ultimately has to decide on the cover art, editing, promotions and whether or not to get rid of the cliches. These can be scary decisions.

You have to put the money up front, or beg for backers, and anyone who can afford advertising and publicists have a head start in the sales department. That’s a little daunting when you first begin because you don’t know if anyone will actually buy your books, and you have no idea how many you might sell.

Indie publishing is a business and you have to run it or get someone else to do it for you. Luckily, my hubby does the books because Maths (Aussie spelling and capitalisation) and I parted company many years ago.

Marketing sucks, especially when you don’t have a budget for it so you have to do it all yourself. Personally, because I find it easier, I spend more time marketing others than I do myself. That’s why I created the Awesome Indies site. I’m relying on karma for my marketing, but it’s too early to know if that actually works or not. I often drop other author’s names when I post on blogs & forums and they have no idea, so if/when my books start selling effortlessly, I’ll take it as proof that karma works.

Readers perception of Indies as being inferior is changing, but where it remains it’s really ugly. Prejudice and injustice always is. Arrogance isn’t a pretty sight either. It’s virtually impossible to have an Indie paperback placed in a brick and mortar store, and even though you can get your ebooks into all the main ebook stores, they still give front page promos to books published by the big traditional publishers.

I hate prejudice, and I do what I can to remove it wherever I find it. That’s why I created the Awesome Indies site. It lists high quality Indie books, there not because they’ve paid for it – they haven’t – but because industry professionals have recommended them. Editors, publishers, those with degrees in literature and writing and other authors are more critical than the average reader, so if a book’s on this list, you can be sure it’s a professional product. Negative attitudes will change when readers start using lists like this to select their Indie books.

I love it when artists just get out there and do it themselves, when they bypass – and to some extent make obsolete – the narrow systems set up by people employed to decide what the public want. (It’s the revolutionary in me). Liberation for authors is being able to get your work directly to readers and letting them decide if it’s any good or not.

Then there’s the different, the creative, the new, inspiring fiction and ideas that can only emerge away from mainstream publishing houses.  Only Indies can afford to risk something different. I worked in theatre for many years and the new ideas and most creative work came from the fringe, in publishing, it’ll come from the Indies.

If you want something different, you won’t find it from a big publishing house, but you’ll find plenty of it amongst the Indies.

What books have you read that you would call a new direction, or just highly creative or different?

Tahlia is an avid reader, an extremely casual high school teacher and an occasional mask-maker. She has studied philosophy & meditation for many years and likes to write inspiring & empowering stories that question the nature of reality, mind and perception. After scripting and performing in Visual Theatre shows for 20 years, she is now a bone-fide expatriate of the performing arts. She lives in an Australian rainforest, is married with a teenage daughter and loves cats, but she doesn’t have one because they eat native birds.

Favorite books: We asked Tahlia to share some of her favorite Indie reads – it turns out there are a few too many to mention! Intrigued? Check out the Awesome Indies site, in particular the Humour and Young Adult>Urban Fantasy listings!

A Matter of Perception 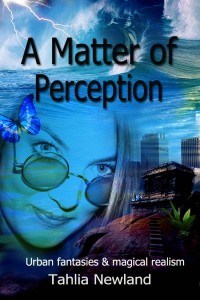 Take a journey into a world where the hidden becomes manifest, and the lines between fantasy and reality blur. This collection of imaginative and entertaining stories about ghosts, sirens, light spectrum mages, realm hopping gods, alien monsters and ordinary people will warm your heart and make you smile, shiver, and maybe even wonder about the nature of reality itself. The theme of individual perception as a result of our assumptions, beliefs and emotional experience bind these otherwise diverse stories into a unified whole.

Excerpt from Mistril’s Mistake, an urban fantasy story from A Matter of Perception.

The pub was just as Eleanor remembered it, dingy, crowded and smelling of cigarette smoke and stale beer. The dim booths made the perfect hiding place for people such as the young couple indulging in forbidden passions, the pair of dealers entertaining customers and the group of thieves gloating over their latest acquisitions.

Damien was there. She could feel him when his psychic invisibility flickered off. Since he probably still couldn’t maintain both mental and physical invisibility at the same time, she should be able to see him, but her scanning of the darkest nooks revealed nothing. She couldn’t use her powers or he would know she was there, so she tried to get a fix on him during his flashes of mental existence, but he kept moving.

The back of her neck prickled and she turned to see a black-haired man in a green shirt pushing purposely through the throng. He bristled with the power of the light, but not pure hues. His light shone with the colour of glazed mud. Eleanor turned away, feeling sick to her stomach. Was Damien desperate enough to turn to Brassel?

Eleanor watched Brassel weave through the crowd to the far corner. She followed him, staying out of sight, and her heart skipped a beat when she saw Damien standing in the shadows. Brassel nodded curtly at the younger man, and as he began to speak, Damien’s psychic shield slipped away. Cautiously, Eleanor extended her aural senses with a subtle stream of green. She had to risk it, had to know what they were talking about.

‘So you want protection from the old witch,’ Brassel said in his hard gruff voice.

‘Yes, and quickly. Can you do it?’ Damien replied. He sounded scared.

‘Perhaps,’ Brassel replied, ‘Perhaps not.’ Eleanor could hear the smile in his voice.

‘Probably not. I expect she’s already got someone on your tail and your invisibility shield is not very good.’

Eleanor dropped her probing and smothered herself with a mist of red. She didn’t dare resume her probe and concentrated instead on circling closer while keeping out of sight. It annoyed her that she didn’t hear what sort of deal they were making, but with Brassel it couldn’t be anything good.

Five minutes later, the most dangerous of the expelled practitioners walked from the pub with a self-satisfied smirk on his face, and the bar erupted into a brawl. Torrents of abuse and women screaming filled the air while Eleanor backed against a wall out of the way of flying glasses, bottles and human beings.

Slithers of sharp white light flew from Damien’s corner. The brawl was unlikely to stop so long as he kept it up, so Eleanor counteracted by flooding the room with calming blue. White battled blue, sharp against smooth. Eleanor peered through the crowd and glimpsed spikes of frozen anger and frustration bursting from his body. Stupid man. Infected with emotion gone wild, light power was brittle, easily shattered.

Tahlia is giving away five copies of her short story A Hole in the Pavement.

Every morning, Norris watches his goddess walk to the bus stop in front of him, the gap between them far wider than the physical distance. This morning, she stumbles. He wants to run and help her, but finds himself stuck in a hole that appeared along with his self doubt. By the time he gets out, she’s long gone. He vows that if it happens again, he won’t hesitate, but when she falls the next day, he has more than just his own hole to deal with. Can he find his heroic self before she walks away?

This heart warming, humorous and profound magical realism short story (5000 words) is a readers’ favourite from ‘A Matter of Perception,’ a collection of short stories by Tahlia Newland.

Tahlia Newland – author of A Matter of Perception

Naomi Blackburn – co-moderator of Sisterhood of the Traveling Book

Roz Morris – author of My Memories of a Future Life

Susan Salluce – author of Out of Breath

Michael Burns – author of The Horn

Donna – founder of Girl Who Reads

Kathy – founder of I Am A Reader, Not A Writer

Christine Nolfi, author of The Tree of Everlasting Knowledge